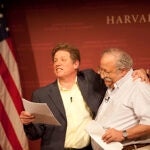 There were pizzas and plenty of curious students at the Harvard Law School (HLS) on Tuesday (March 30) for a luncheon talk sponsored by the School’s American Constitution Society. The only thing missing at first was the speaker.

So many people crammed the Austin Hall classroom that late arrivals stood in the doorway or sat on the stairs. The busy scholar arrived shortly. It was understandable that she was running a bit behind schedule. The professor in question was Elizabeth Warren, who these days has massive demands on her time.

In her characteristically straightforward style — a recent New York Times article noted Warren’s husband “describes her as a grandmother that can make grown men cry” — she explained her work with the TARP, and delivered a stern warning to the audience about abuses in the financial industry.

“If you are carrying a balance on your credit card, you are in danger,” said Warren.

Looking out for consumers has long been a priority for the expert on bankruptcy and consumer finance, who also is a driving force behind plans for a new consumer financial protection agency, a proposal supported by the Obama administration and currently before Congress. The House has approved the plan, which is now before the Senate. Many supporters are hopeful that Warren would run the new body.

During her comments, Warren offered a historic perspective on the country’s financial troubles.

In the past, state usury laws protected consumers from inflated interest rates, she said. But in 1979 a Supreme Court ruling began a chain reaction that led to states repealing their caps on the interest rates that banks could charge when lending.  With that decision, she said, “The game quickly becomes unraveled.”

“What starts to happen over time … is that the model shifts for how to make money,” Warren said, noting the explosive expansion of the credit card industry and how lenders began to rely on what she called “the tricks and traps in the back,” including hidden fees, complicated pricing structures, and interest rates that can change without warning.

The result, she said, is that when consumers “can’t really price the item and can’t really do comparison shopping  … it’s not a functional market.”

Warren’s proposed solution would be an agency much like the Food and Drug Administration or the Environmental Protection Agency, one that could implement basic safety regulations for financial products. Such an agency, she said, could level the playing field for consumers by addressing the root of the problem, eliminating complex financial contracts that leave people “unable to evaluate the cost of the product.”

Warren said such an agency could regulate standard credit card contracts, making them no longer than two pages, and “readable by someone with a high school education, in 4 minutes, with 95 percent comprehension.”

“Complexity not only hides true cost,” said Warren, “it lets us hide it from ourselves.”