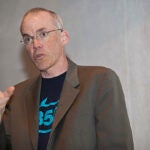 Reduce. Reuse. Recycle. We hear this mantra time and again. When it comes to carbon — the “Most Wanted” element in terms of climate change — nature has got reuse and recycle covered. However, it’s up to us to reduce. Scientists at Harvard Medical School are trying to meet this challenge by learning more about the carbon cycle, that is, the process by which carbon moves from the atmosphere into plants, oceans, soils, the Earth’s crust, and back into the atmosphere again.

One of the biggest movers and shakers is the lowly cyanobacteria, an ocean-dwelling, one-celled organism. Pamela Silver, HMS professor of systems biology, and colleagues have uncovered details about how this bacteria fixes, or digests, carbon. These bacteria build miniature factories inside
themselves that turn carbon into fuel.

Silver and her colleagues report online in the journal Science that the bacteria organize these factories spatially, revealing a structural sophistication not often seen in single-celled organisms. This regular and predictable spacing improves the efficiency of carbon processing. In the future, an understanding of the mechanisms that govern this spatial organization may help improve the efficiency of designer bacteria engineered to produce carbon-neutral fuels such as biodiesel and hydrogen.

The rod-shaped cyanobacteria are among the most abundant organisms on earth. Forty percent of the carbon in the carbon cycle is reused and recycled through these tiny creatures. To process carbon, cyanobacteria build soccer-ball-shaped structures inside themselves called carboxysomes. These tiny factories absorb carbon dioxide and convert it into sugar, which the bacteria then use to produce energy.

“The ocean is just packed with these bacteria. By studying them, we’re understanding more about how the earth works,” said Silver, who is also on the faculty of the Wyss Institute for Biologically Inspired Engineering at HMS. “I’m blown away by what’s happening in the ocean and what we don’t
understand about it. There are a lot of things in the ocean that are going to be useful to us.”

The research team, led by co-first authors, research fellows David Savage and Bruno Afonso, attached a fluorescent tag to proteins involved in building the carboxysome, then grew the tagged bacteria under a microscope.

The resulting images revealed that, instead of being randomly numbered and haphazardly placed, cyanobacteria build carboxysomes in numbers that scale with their size, and they space the factories evenly along their length.

The finding adds evidence for new ways to think about bacteria. “We had this idea of bacteria as a bag of enzymes, but that has been completely shattered,” said Afonso.

A single protein, called parA, acts as a kind of inner-bacterium stage manager, arranging the carboxysomes in a neat, single-file row, the researchers found. When they disabled the bacteria’s ability to make the protein, the carboxysomes were distributed far more randomly.

The cyanobacteria lacking parA were also less “fit” for survival, said Savage. While wild-type bacteria cells have a consistent number of carboxysomes, which in turn optimizes carbon processing and fitness, the knockout bacterium created daughter cells whose numbers of carboxysomes ranged from none to an excess. The daughter cells with few or no carboxysomes divide more slowly and also process fifty percent less carbon than daughter cells at the other end of the spectrum. (see video 1)

By tagging parA in wild-type bacteria, they discovered interesting dynamics in the protein. Thousands of parA proteins repeatedly cluster together and shoot quickly from one end of the bacterium to the other.

“It’s amazing that you can generate this regularity and symmetry potentially from a single protein,” said Savage. “It’s amazing that it is somehow tuned by the dynamics of the protein.” The researchers have not yet identified the exact mechanism parA uses to govern the spacing.

Many other bacteria also have the parA protein, which is known for separating chromosomes during cell division. “This work highlights how bacteria cobble together spare parts to achieve similar goals such as organization and segregation,” said David Rudner, HMS assistant professor of microbiology and molecular genetics, who was not involved in the study.

“Knowledge about how cells create and deploy specialized factories like the carboxysome opens the way to creating other kinds of mini factories that could perform useful functions,” said Richard Losick, Harvard University professor of molecular and cellular biology, who was not involved in the study.

Silver’s lab is looking into whether the carboxysome might be useful for optimizing the production of hydrogen by engineered bacteria. One challenge in designing hydrogen-producing bacteria is that the enzymes that produce hydrogen are sensitive to oxygen. The carboxysome may help solve this
problem because its outer shell blocks out oxygen, protecting the enzymes inside from its toxic effects.

This research was funded by the US Army Research Office.