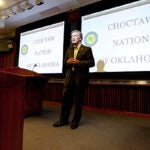 Duncan, who was on campus for a discussion sponsored by the Harvard Graduate School of Education (HGSE) and the Harvard chapter of Phi Delta Kappa, cited the nation’s high dropout rates and the persistent achievement gap between white students and their minority counterparts as clear evidence of the nation’s failing school system.

Getting the “hardest-working and most-committed” teachers to the communities that need the most help is a big part of the challenge, noted Duncan, who said the Obama administration would commit a “huge” amount of resources toward “correcting that imbalance.”

“Some form of higher education has to be the goal for every single one of our students,” said Duncan, who called education the “civil rights issue of our generation.”

In her introductory remarks, HGSE Dean Kathleen McCartney, who is also Gerald S. Lesser Professor in Early Childhood Development, noted that Duncan has “described education as the only sure path out of poverty and the only way to achieve a more equal and just society.”

Duncan, who graduated from Harvard College in 1986, said he drew inspiration from his parents. (His father was a college professor, and his mother ran a tutoring program for inner-city children in Chicago.) As a young boy, Duncan began working afternoons and evenings with students as part of his mother’s after-school program and quickly realized the importance and impact of good teachers.

“So often, I felt what we were doing … was [making] up for what wasn’t happening during the school day.”

Prior to joining the Obama administration, Duncan served as chief executive officer of the Chicago Public Schools, where he implemented a series of reforms, including the expansion of after-school and summer learning programs, increased access to early childhood education programs and higher education, as well as the improvement of teacher quality.

“This is a very important moment for education in the United States,” said Harvard President Drew Faust, who opened the afternoon discussion with brief remarks. “We are really proud that one of our own is taking the leadership at this time.”