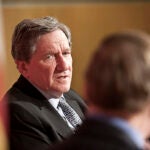 Experts examine the role of technology in promoting democracy

As audience members tapped away on their myriad electronic devices, Jerry Mechling, Harvard Kennedy School (HKS) lecturer in public policy and faculty chair of the Leadership for a Networked World Program, asked a panel of experts to discuss the wealth of opportunities and challenges presented by new digital technologies.

The discussion, titled “Digital Governance from the State House to the White House,” specifically examined how the technology revolution has impacted federal, state, and local government, and explored the ways technology can be used to promote and advance democracy while at the same time avoiding potential pitfalls like privacy issues and outdated infrastructures.

Leaders who “get it,” who understand the importance of using technology to further democracy and “are committed to the principles of openness and transparency,” are a vital part of the equation, said Aneesh Chopra, chief technology officer of the United States.

Chopra noted that his boss is part of the new generation of leaders who fully embrace the power and potential of technology.

He cited Obama’s Open Government Initiative, which promotes transparency, access to information, and the public’s participation in federal government through feedback and collaboration, as evidence of the administration’s commitment to engage with technology.

Using the Internet, said Chopra, the administration has engaged with doctors who weighed in on an online forum on health care as well as with the front line of Department of Veterans Affairs workers who offered suggestions via the Internet on how to improve the cumbersome method of processing veterans’ claims. Additionally, all federal agencies, he noted, continue to solicit feedback from the public via links on their Web sites that allow visitors to submit ideas.

“If you want to solve big problems,” said Chopra, “you are going to want to tap into the expertise of the American people and hear … all of their views in order to come up with the best strategy.”

The current governor of Massachusetts used the Internet to gain critical name recognition and communicate with voters, remarked Anne Margulies, chief information officer for the commonwealth. A relatively unknown four years ago, Gov. Deval Patrick used online platforms, she said, “to get his message out,” adding that the state’s highest executive continues to use technology as an important “way to communicate and engage” with the public.

Expanding broadband access in underserved areas, developing universal technologies that can be used from state to state, reworking an outdated infrastructure, and developing solid privacy and security practices are all part of the way forward, said the panelists.

Persuading middle managers within any organization, many of whom are not as tech savvy as younger generations, to embrace the digital age and its innovations, is another challenge, said Teri Takai.

Assisting those managers in understanding how “tweeting” or “blogging” can “change the dynamics” of what they do will drive important systemic change, said Takai, chief information officer for the state of California.

Chopra, who holds an M.P.P. from HKS, urged the School’s next generation of graduates to be part of the technical revolution.

“We will be there to help,” he said, “but we need to have your participation.”