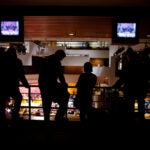 Faith and the marketplace

Rosalie Silberman Abella, the daughter of a Jewish lawyer who survived the Auschwitz slaughter, was born in a displaced-persons camp in Stuttgart, Germany, in 1946. A few weeks before, the first Nuremberg trials had begun prosecuting alleged Nazi war criminals on a world stage.

Abella, who spoke at Harvard on Monday (March 1), is now a justice on the Supreme Court of Canada, the first Jewish woman to attain that post. But her memories of a darker time have never left her. Her mother also was an Auschwitz survivor, and her older brother died in a concentration camp. He was 2 years old.

Discussing the importance of human rights, she said, “To me, this is not just theory.”

Holding back tears, Abella shared memories of her father’s postwar letters, her childhood in a ruined Germany, and her father’s salvation by Allied mentors. “These Americans believed in him,” she said, “and they gave him back the belief that justice was possible.”

When Abella was 2, her father introduced human rights champion Eleanor Roosevelt at the camp, apologizing for having so little to provide. “The best we are able to produce are these few children,” he said. “They alone are our fortune and our sole hope for the future.”

The postwar years provided a shining example of American justice that Abella said propelled her along an ascendant path in jurisprudence, and fired her passions. “My life started in a country where there had been no democracy, no rights, and no justice,” she said. “It created an unquenchable thirst in me for all three.”

Along with democracy, rights, and justice, said Abella, comes the freedom to embrace an identity “with pride, dignity, and peace.”

Identity — how to preserve it, when to modify it for the common good — was at the heart of Abella’s hour-long lecture, “Identity, Diversity, and Human Rights.” It was part of the 2009-10 Dean’s Lecture Series at the Radcliffe Institute for Advanced Study.

Early on, Abella was a family court judge, “the youngest and the first pregnant judge in history,” said Harvard Law School Professor Frank I. Michelman, who warmly introduced his longtime friend.

Abella has 27 honorary degrees, and a degree in classical piano from the Royal Conservatory of Music. Radcliffe Dean Barbara J. Grosz shared a friend’s description of Abella as “spellbinding, brave, and a breath of fresh air.”

Canada’s foremost legal authority on human rights used her Radcliffe lecture to call for a reconsideration of the rule of law. This venerable concept has sometimes given legal cover to human rights abuses, she said, including South African apartheid, Jim Crow segregation, and Nazi Germany’s genocide.

Arriving at a rule of justice requires the world to embrace “core democratic values,” what she called “the instruments of justice.” These include due process, a free press, the right of association, and protections for minorities.

But a universal rule of justice seems further away now than it did in 1946, said Abella. In the postwar period, the world awakened to something beyond the individual rights touted for centuries, thanks to Hobbes, Locke, Mill, and other sweeping thinkers. World War II introduced the idea of “the rights of the group,” she said, a guarantee not just of civil liberties, but of human rights.

Abella longed for the “luminous world vision” of the aftermath of World War II. That vision prompted the Universal Declaration of Human Rights (1948), the Convention on Genocide (1948), and the 13 Nuremberg trials (1945-1949), the “phoenixes that rose from the ashes of Auschwitz and roared their outrage.”

Over the following few decades, that outrage yielded “the most sophisticated array of laws, treaties, and conventions the international community has ever known,” said Abella, “all stating that rights abuses will not be tolerated.”

Yet, she said, the world has since failed to embrace the three lessons that emerged from World War II: that indifference is the incubator of injustice; that it’s not what you stand for, it’s what you stand up for; and that people must never forget how the world looks to the vulnerable.

Abella recapped this recent backsliding on human rights with a list of nearly 20 examples of genocide, flagrant rights abuses, and outlaw nations.

By the 1980s, human rights advances had stalled worldwide, said Abella, in part because of widespread opposition to “the diversity theory of rights” and its association with the notion of “political correctness.” By the 1990s, she added, the world was in the throes of a “rights distress,” as instances of genocide and abuse picked up in speed and numbers.

To this day, on the eve of the 65th anniversary of the liberation of Auschwitz, “We still haven’t learned the most important justice lesson of all,” said Abella, that there is a need to close the gap between the values we articulate and the values we enforce. The result is “an inexplicable international tentativeness” over human rights issues, she said. “We need more than the rhetoric of justice.”