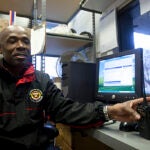 Donations that make a difference

Radcliffe Fellows can tell that tale

In Java, Radcliffe Fellow Nancy J. Smith-Hefner studies a functional — if sometimes tense — negotiation of gender roles within Islam. But in some Muslim societies, the tension between genders can lapse into violence. Other Radcliffe fellows can tell that tale.

Shahid has seen gender conflict within Islam escalate into gang rapes, acid attacks, honor killings, forced marriages, and other forms of violence. Legal reforms in Pakistan are slowly improving the picture, including a Women’s Protection Act and a law that protects women from workplace harassment.

Now Shahid is part of an effort to improve things further, on an international scale. Last month, she appeared with U.S. senators John Kerry and Barbara Boxer in Washington, D.C., at the reintroduction of the International Violence Against Women Act. If enacted, the law would tie all U.S. international aid to violence against women and girls, and make the issue a diplomatic priority.