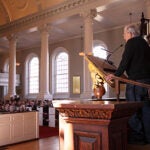 In 1963, Richard Holbrooke was a 22-year-old Foreign Service officer in the Mekong Delta of Vietnam, where a war that would inform U.S. policy for a generation was just beginning to widen.

Nearly 50 years later, he is still involved in diplomacy, now for the White House as special representative for Afghanistan and Pakistan. Measured and frank, Holbrooke spent an hour recently discussing foreign policy issues at the Harvard Kennedy School (HKS). Among other things, he shared his concern for Afghanistan (critical), his belief in negotiating styles (flexible), and his relationship with Afghanistan President Hamid Karzai (respectful).

The longtime diplomat spoke along with Graham Allison before a capacity crowd at the JFK Forum on March 4. (Allison, a friend of Holbrooke’s going back to Vietnam, is Douglas Dillon Professor of Government at HKS and director of the Belfer Center for Science and International Affairs.)

The first question was one that Holbrooke acknowledged he is asked a lot, “but never by anyone under 50”: Is Afghanistan America’s new Vietnam?

Not really, he said, naming a “core difference,” in that North Vietnam and the Viet Cong were never a threat to the U.S. homeland. The Taliban and al-Qaeda, on the other hand, represent “a direct, unambiguous threat to the United States,” said Holbrooke. “They know what they want. They want to create chaos … to destroy a civilization they hate.”

It was not a mistake to get into a war in Afghanistan, he said of the months following 9/11, but “the tragedy is, we got diverted to Iraq.”

Allison cited Holbrooke’s noted skills as a negotiator. For instance, he was the chief negotiator behind the 1995 Dayton Peace Accords, which ended the Bosnian civil war.

“Negotiations are a lot like jazz,” said the 68-year-old diplomat. “They’re improvisations on a theme.” The bargaining table is a place for both focus and flexibility, he said, but final agreements had better be both acceptable to all parties and enforceable.

Still, any classic assumptions about negotiation are confounded in Afghanistan, because “the Taliban do not represent a government,” said Holbrooke, who called the group instead “a political movement led from sanctuary.” Al-Qaeda, which he said is “even more shadowy,” represents the same bargaining complication. “There’s nothing they want we could give them,” said Holbrooke, “and there’s nothing we could give them they want.”

Also, there are places that U.S. diplomacy does not go these days, and one is Kashmir, he said, because “an outside negotiator can’t do the job.” Since 1947, India has been pitted against Pakistan in conflicts that have erupted three times over that disputed area.

India, Pakistan, and Afghanistan are the center of what may be “the most volatile part of the world today,” said Holbrooke, and are important to international stability. Other nations have security interests there, including Russia, China, Turkey, Saudi Arabia, and Iran. It’s “a very, very large terrain,” said Holbrooke, which in diplomatic terms includes “a lot of moving parts.”

At the unsteady center of this unstable region, he said, is Afghanistan, “a weak and poor country” wracked by 31 years of warfare.

Thirteen months ago, Holbrooke and his new team at the White House were “astonished at what a mess we had inherited” in Afghanistan, he said. Back then, the United States was represented by just 300 civilian employees and — more disturbing, said Holbrooke — only 10 agricultural specialists in a country that was once a breadbasket to the region. (A year later, those numbers, respectively, are 900 and 100.)

The United States halted a poppy seed eradication program that was driving farmers into the arms of the Taliban, he said. Cash-for-work programs are in place for farmers, and U.S. National Guard teams are bringing agricultural experts to the countryside.

There are also more efforts now to train Afghan police and army units.

With these “vast changes,” said Holbrooke, comes an ancillary fact: There has been no emphasis yet on bringing international diplomacy to bear on Afghanistan. But in the wake of America’s civilian buildup, he added, the United States is now ready to look at issues of international terrorism.

For future diplomats in the HKS audience, said Holbrooke, Afghanistan offers an opportunity for an active posting analogous to the one he took as a young man, distributing U.S. aid in rural Vietnam. “It was greener,” he said of the Mekong Delta, but in Afghanistan parallel opportunities await.

But U.S. aid of any kind should avoid what he called a “dependency trap,” through assistance that overrides or neglects local authorities. “Classic direct civic action” can certainly accomplish good deeds, said Holbrooke, but if it stays American-only, it is not sustainable.

At any rate, starting in July 2011, the United States expects to begin military withdrawals from Afghanistan, the “pace and scope” of which are yet to be determined. But “the civilian effort must continue,” said Holbrooke.