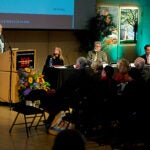 Forge ahead, and build your brand

Did you hear the one about the Jew and the Palestinian at Harvard? It seems that making jokes about deadly serious situations underscores how laughter crosses ethnic and cultural boundaries.

OK, so it’s not exactly ushering in world peace. But it’s a start, and that was enough for the organizers of “Israel & Palestine: Embracing Humor; Respecting Humanity,” a comedy show and panel discussion held March 25 at the John F. Kennedy Jr. Forum at the Institute of Politics.

“I could be the only person that’s really hopeful about the situation in the Middle East,” said host Jimmy Tingle HKS ’10, a comedian, activist, and all-purpose funnyman, who spearheaded the event. “Because it is the home of the three major religions in the world … they all focus on the spiritual principles of love, justice, peace, forgiveness, compassion, loving one another.”

A funny thing happened on the way to the forum — and yes, the comedians could not pass up that obvious one-liner — and that was how people of different religious backgrounds could laugh together.

Maysoon Zayid, a Palestinian-American comedian, brought down the house with fearless zingers in unsettling territory about her upbringing, her cerebral palsy, her virginity, and her foil of a fiancé.

“I am THE most oppressed person in the entire world. I am female. I am Muslim. I’m a virgin. I’m an Arab, and I live in New Jersey,” Zayid quipped.

Jewish-American comedian Scott Blakeman talked about bringing together two enemy camps, Yankee and Red Sox fans. He needled former Attorney General Michael Mukasey for his position on torture, saying that while it was nice to see an observant Jew as attorney general, “Why can’t you observe the Sabbath AND the Geneva Convention?”

In the wake of health care reform, he suggested putting health insurance companies to work in the Defense Department: “ ‘I’d like to bomb that country.’ ‘Sorry, not covered.’ ‘How about sending more troops in Afghanistan?’ ‘Nope. Pre-existing war.’ ”

The evening took a more serious turn in the second half with a panel discussion, moderated by Marshall Ganz, Harvard lecturer in public policy.

Wassim Khazmo, a Palestinian from Jerusalem and a Kennedy School public administration midcareer student, described growing up during the Intifada, or Palestinian uprising, of the late 1980s, “when all I wanted to do was play football,” and how Israeli authorities cracked down violently on a Palestinian rally welcoming South African Nobel Peace Prize laureate Desmond Tutu, a memory he carried “along with me through the years.”

Barak Loozon, an Israeli Wexner fellow at the Kennedy School, told of being brought up by a father who said, “Never trust an Arab,” of serving in the Israeli army, and of the psychological trauma his sister experienced when she survived a suicide bombing of a pub that seriously injured her boyfriend.

Yet both men indicated they would work toward a resolution of Middle East violence, though both were somber about the difficulties faced. “Barak and I can talk logically, but we have our differences,” Khazmo said. Loozon said, “Hope is not enough. There is a lot to do.”

Indeed, pressed for details on what a Middle East peace would look like, both men were hesitant. Khazmo emphasized that Palestinians needed justice; Loozon said a third party was needed to mediate.

Ganz, however, struck a more optimistic note by characterizing the event as a “success before it even began” by the sheer fact of bringing different parties together. The forum was, he acknowledged, an “unlikely event. But it’s often to the unlikely we turn when we’re stuck.”