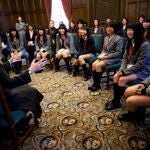 SHANGHAI, China — The Chinese characters framed at the entrance of the new Harvard Center Shanghai capture the concept of “entrepreneurship imbued with the soul of the noble man.”  The intricate calligraphy, created by Qianshen Bai to mark the center’s opening, quotes a Confucian monk who is credited with leading education reforms early in the Ming Dynasty, urging a balance of “intellectual inquiry” and “practical action.”

Intellectual inquiry and practical action were both on rich display at “Harvard and China: A Research Symposium,” a series of lectures, panels, and break-out sessions held to mark the official opening of the Harvard Center Shanghai on March 18. The symposium attracted faculty and administrators from across Harvard, and explored multiple dimensions of China past and present, from its emerging rural health care system to crisis management to “architecture and urbanism” in Shanghai and beyond. Nearly 300 attendees from the Harvard community, including many alumni living and working in the region, attended the conference, as did more than a dozen Chinese dignitaries and several journalists.

The Harvard Center Shanghai, which occupies an entire floor of one of the newly constructed skyscrapers in the city’s Pudong section, is the first such presentation and research space of its kind outside of Boston and Cambridge, and represents an important next stage of the University’s long engagement in Asia. The center is intended to serve as a locus of research and teaching activity, and while its creation has been spearheaded by the Harvard Business School (HBS) and the Harvard China Fund, it is specifically intended as a resource for Harvard faculty, students, and alumni across all of Harvard’s Schools.

In her remarks at the celebratory dinner following the symposium, President Drew Faust called the center the product of remarkable collaboration, and an expression of Harvard’s commitment to what she called the “free trade of ideas. Increasingly,” she said, “we are in a world of universities without borders, and this new center is a case in point. Universities exchange faculty and students as never before and engage in an increasingly porous world of international problem solving and collaboration. Higher education is developing a global meritocracy.”

For Harvard Business School, the new venue will serve multiple purposes, most importantly, enabling it to explore a range of potential activities in support of its research and teaching programs. The Harvard Center Shanghai will operate under the direction of the HBS Global Initiative, which also oversees international research centers in Latin America, Japan, India, and Europe. Each center has an executive director who leads a team of case writers, all of whom are fluent in the language of the host country and familiar with its customs, companies, universities, and governments.

“We are very pleased to be opening this new facility in greater China,” said Dean Jay Light. “Harvard Business School has had a longstanding interest in and commitment to the region. Today, increasing numbers of HBS faculty list China among their top areas of geographical interest. The center will add significantly to our research and our understanding of the world’s fastest-growing economy. We look forward to broadening our partnerships in China and to working with and learning from Chinese businesspeople, government officials, and many others in the years ahead.”

Professor William Kirby, the chairman of the Harvard China Fund who delivered the symposium’s opening plenary, noted: “Our expanded presence in China brings us closer to our thousands of alumni, friends, and partners in the region. Through the resources of the Harvard China Fund, Harvard University will invest in research and teaching partnerships in China, and we will invest in our students: Harvard students who are preparing for a lifetime engagement with China, and Chinese students coming to all the Schools of Harvard. Strengthening our partnerships and enriching the lives of our students is now facilitated by this great new center in Shanghai. For Harvard, as an international university, engagement with and in China is a central and exciting part of our future.”

At a luncheon lecture given by Professor Michael Sandel on “The Moral Limits of Markets,” Mark Schwartz ’76, M.B.A. ’78, M.P.P. ’79, reflected on Harvard’s increasing reach into — and impact on — the world beyond Cambridge and Boston.  “I was in South Africa last week, helping build hospitals there with Harvard Medical School and Mass General,” he said.  “What we are doing in South Africa in medicine is truly transformative. Having been with Harvard last week in South Africa, and learning more about what they are doing here in China today, I have never been prouder to be associated with Harvard. It is simply amazing.”