Forge ahead, and build your brand 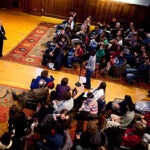 Speakers say those hurt by the economic meltdown shouldn’t wait for reforms, but should focus on reinvention

Now that the recession is officially over in Massachusetts, according to economists if not the public, it’s time to take stock. And the message from speakers at a Harvard Extension School panel Wednesday (March 24) was that people should not wait for economic reforms, but instead should build their own brands and skills in order to prosper.

The panel was the third of four celebrating the Extension School’s centennial. Titled “Doing Business in the Post-Meltdown Economy,” the symposium drew a large and engaged audience to Lowell Hall.

Each of the three speakers viewed the question quite differently. The first, Richard Parker, a lecturer in public policy and a senior fellow at the Joan Shorenstein Center on the Press, Politics and Public Policy at Harvard Kennedy School, took a broad approach, voicing his concern that, in the three years since the financial meltdown began, little headway has been made toward adequate national reform. While many Americans “have suffered losses in our IRAs,” said Parker, and others have lost their jobs and homes, “it’s important to think globally” as the recession increases malnourishment and child mortality worldwide.

“The criticism I have of the modern economy is that it has lost its way,” he said, since it has tended to turn away from Keynesian economics, which includes an active role for government, to a point where “the markets were supremely efficient.” The distribution of wealth has grown consistently more unequal, he said, and “I can’t begin to record the ways in which these inequalities harm our society.”

Harvard and the Extension School have a moral duty to “create a nation of opportunity and justice,” he said. “Knowledge is the antidote to greed and shortsightedness.”

The other two panelists looked at the question from a more personal point of view.

Stuart Sadick, a partner at the executive search organization Heidrick & Struggles who heads the company’s Global Consulting and Advisory Services sector, examined what individuals can do to get back on their feet, post-recession.

“It’s all about you,” he said, “managing your talent, your career, and your brand.”

Taking a more optimistic view, Sadick said, “I think I have a problem with the word ‘meltdown.’ I think it was a profound, very scary adjustment.”

In speaking with dozens of job seekers over the past year, he said, he has found that many people took their job loss as an opportunity to redefine themselves. “The people who are doing better now are the ones who saw possibility, as opposed to doom and gloom,” he said. “When everyone zigs, you better learn to zag.”

If job seekers simply respond to employment ads on Monster.com and other Web sites, for example, they won’t get very far because everyone else is doing that. The people “who really understand what they are about — and why they are particularly valuable to any organization they go to — don’t wait for the job listing,” he said. They use today’s ubiquitous social networking and their own agility to reinvent themselves, “both inside and outside the organization.” Often the people who kept their jobs during the recession, he added, were those who didn’t say, “It’s not my job,” but rather, “I have an idea.”

Sadick conducted a small survey in which he found that 60 percent of respondents said their careers had been affected by the financial meltdown. Of those, 70 percent said they had been affected for the worse. But those very people were the ones who often ended up happier in their new situations. “They bit the bullet, shrugged off corporate life forever, started their own firms, became more focused on building relationships, rethought their career directions. The message from these respondents is people do see tremendous opportunities and possibilities.”

He presented antidotes for those who may find themselves amid public relations crises. “Find the facts,” he said. “Tell the truth about them. Address the problems, even if it’s expensive to do so, and work to regain that eroded trust, even if it involves changing corporate behavior.”

The next centennial panel event, “Sustaining Our Earth’s Ecosystems,” will be 4 p.m. April 14, Lowell Lecture Hall, Kirkland and Oxford streets. Key environmentalists share their passion and commitment to their life’s work.