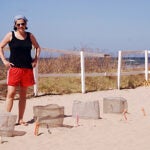 On a recent rainy afternoon in March, a dozen people gathered in Allston, bearing a plan to turn a warren of offices into the new world headquarters of Earthwatch Institute.

As early as April 26, more than 50 staffers from the nonprofit environmental group will occupy 15,000 square feet of a Harvard-owned building at 114 Western Ave. The move from suburban Maynard, Mass., opens new possibilities for Earthwatch, one of the world’s leading citizen science organizations.

The move will mean lectures, open houses, and other outreach to the Allston and Cambridge communities. To kick-start that involvement, Earthwatch will offer fellowships for three Allston teachers to participate in one of its 100 international expeditions.

The move also will mean re-energized collaborations with Harvard faculty, expanding a research relationship that goes back almost to the group’s founding in 1971. (The original Earthwatch headquarters were in Watertown, Mass.)

“We certainly want to have a public face,” said Earthwatch CEO Ed Wilson, a British-trained geographer and former military officer. The group’s research projects on climate change, oceans, ecosystems, endangered species, and other issues could translate into a public lecture series, he said, and could prompt environmental education programs benefiting schools in Allston, Brighton, and Cambridge.

The lease agreement between Harvard and Earthwatch highlights the University’s continuing stewardship of its Allston properties and active engagement with the Allston community. Last year, President Drew Faust pledged “aggressive and effective leasing of vacant or partially vacant Harvard properties,” and other measures to improve community vitality.

While its main mission spans the globe, Earthwatch already is involved in Greater Boston. Scores of Boston Public School teachers and students have participated in its expeditions in the past several years to promote science literacy and global citizenship. Bringing experiential science opportunities to students and teachers can help to reverse science literacy shortcomings that are endemic in the United States, said Wilson, and even “change the way magic happens in the classroom.”

During his 12 years with Earthwatch, he has sampled some of that magic firsthand, digging for mammoth bones in the Gobi Desert, for instance, and catching snakes in the Tian Shan Mountains of Central Asia.

As for Harvard, Wilson said that Earthwatch’s new Allston address will mean greater access for the University to a worldwide network of 1,000 scientists and to new opportunities for collaborative research, funding, and student involvement.

Wilson, CEO for the last five years, wants to reach out to the Harvard Business School to discuss ways in which the nonprofit sector can engage its corporate counterpart in solving environmental problems. “The changes we want to see in the world,” said Wilson, “are not going to come from government.”

Earthwatch depends on volunteers, philanthropists, and foundation and corporate partners to fulfill its mission. Noted as a top charity by the U.N. Global Compact for engaging the corporate sector, Earthwatch delivers unique programs, together with leading multinationals such as HSBC, Cadbury Schweppes, Starbucks, and Ernst & Young.

He also hopes that Earthwatch’s “very effective experiential teaching model” will be of interest to the Harvard Graduate School of Education.

The group, which has about 150 employees worldwide and an annual operating budget of more than $25 million, creates opportunities for 4,000 global volunteers a year who become short-term (one to three weeks) research assistants on scientific expeditions in more than 50 countries. Earthwatch also has offices in the United Kingdom, Australia, and Japan, as well as field offices in China, India, Brazil, Costa Rica, and Kenya.

Since 1971, Earthwatch has sponsored about 3,000 expeditions, distributed about $80 million in research funding, and has attracted more than 100,000 citizen scientists.

“You need hands, and eyes, and ears, people who can take photographs and take measurements,” said Earthwatch founder Brian A. Rosborough, who joined the tour of 114 Western Ave.

These international volunteers represent about half the number of Peace Corps volunteers deployed each year. “Not big numbers,” said Rosborough, but numbers big enough to prompt “ripple effects” that change minds and change policy. “Problems owned are problems solved.”

He mentioned a hypothetical trip to Greenland, where global warming could be causing drastic changes, and how witnesses returning home could testify to the severity of the problem.

Wilson called the volunteer model a powerful engine for change. “You can have all the science in the world. You can have journals stacked up to the ceiling,” he said. “But if you’re not getting people involved, it’s not going to take hold.”

Rosborough said his group’s “strong relationships” with Harvard go back to the 1970s. The group’s first four test projects in 1971 involved Smithsonian Institution geologists. But Harvard researchers soon signed on too, including the late Roger Revelle, the first scientist to study global warming and an early inspiration for Harvard graduate and former Vice President Al Gore, a leading advocate of climate protection.

The first formal Earthwatch-Harvard collaboration came in 1973, involving Harvard astronomer Donald Menzel, who studied a total eclipse of the sun from Mauritania in western Africa.

After the move to Allston, said Rosborough, “Our presumption is that Earthwatch will develop close alliances to the academic community.”

At the center of these new Earthwatch-Harvard-community opportunities is 114 Western Ave., a modern and modest three-story building that once housed the offices of public broadcasting station WGBH.

During the two-month renovation, tiny offices and gridlike corridors will be replaced by workspaces without walls. The second-floor layout will be similar to Earthwatch’s present headquarters in Maynard, said Wilson. “This kind of open structure helps create a sense of community.”

Reconstruction will be minimal, as walls and old carpets are removed, said architect Jeffrey W. Brown to the visitors, since “a lot of this project is demolition.”

A conference room lined with windows will open onto a dining area that, despite its compact size, was once a cafeteria that fed 600 WGBH employees daily.

Skylights, in place already, will brighten the atrium. “We were keen to get as much daylight in here as possible,” said Brown, whose offices are in Watertown. “We’re trying to make the place look way open.”

Rosborough peered into a small break room, and thought of the Earthwatch staff.

“It’ll be fun,” he said of the new Allston space, alive with possibilities for collaborations with Harvard and its neighbors. “It’s a big move for us.”