Donations that make a difference 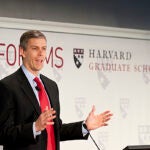 Carmelite Delvas saw more than she could bear.

The Harvard employee, a native of Haiti, rushed to her devastated homeland after the massive earthquake to search for her 79-year-old mother, who uses a wheelchair.

Delvas found her mother living on the street in Port-au-Prince, without food, water, or access to her heart medication, surrounded by destruction and death.

Together, mother and daughter spent five days on the street. A couple of hours a night of sleep was all that Delvas, a 48-year-old who suffers from diabetes and high blood pressure, would allow herself, fearful of robbers who were roaming the ruined capital.

In a desperate attempt to return to the United States, she made her case at the airport in Haiti, but officials refused to let the pair travel together. Delvas could leave the country, but without the documentation required, her mother would have to remain.

Finally, after an eight-hour bus ride over rough mountain roads to the Dominican Republic, the pair were able to fly to Boston.

For the past month, Delvas has been helping her mother to recover, struggling with the complicated process of securing for her a visa and trying to find her a place to stay. Fortunately, with help from the Harvard University community, Delvas’ rough road has gotten a little smoother.

Like nearly 100 other Harvard employees with direct ties to Haiti, Delvas recently received assistance from the Harvard Haiti Emergency Relief Fund for Employees. The fund was created to provide financial support for emergency or unanticipated expenses arising from the quake, and was initially established with gifts from the University and the Harvard University Employees Credit Union. It is currently accepting donations from the Harvard community.

“The University has responded in the most compassionate and practical ways,” said Carol Kolenik, director of Harvard’s Bridge Program, which helped employees with the fund’s application process. She mentioned a few: setting up the fund, bringing in grief counselors, and holding a heartfelt memorial service.

Haiti no longer makes the headlines, said Kolenik, “but the tragedies continue for the people in Haiti every minute of the day.”

“So many wanted to help our colleagues who were touched by this tragedy,” said Marilyn Hausammann, Harvard’s vice president for human resources. “We’re grateful that so many Harvard employees contributed to the fund, ensuring that it would make a real contribution. We hope that the community will continue to demonstrate its generosity.”

Another fund recipient, Jean Bellevue, was home watching the news when he learned of the quake. He spent the next two days trying to call family and friends, and crying with his wife, also a Haiti native. On the third day, he learned that his mother-in-law was dead. His cousin and his cousin’s wife, eight months pregnant, also perished. His brother, Bellevue was told, had been crushed by cinderblocks and was unable to walk.

In addition to losing loved ones, Bellevue learned that his retirement home in Port-au-Prince had been turned to rubble.

For weeks, he and his wife have been sending money back to family and friends for basic necessities, like food.

“I am not keeping one penny,” he said. “Everybody I talk to is doing the same thing.”

In addition to a direct grant from the fund, Bellevue, custodial crew chief at Leverett House, also took advantage of the Credit Union’s zero percent interest loan program, which he can reimburse in small monthly installments. The day he received the loan, he sent the money to Haiti, where relatives are building a home for his mother, whose house was also destroyed in the earthquake.

“I really appreciate it,” he said, “but I still need a lot of money.”

For information about how to donate to the Harvard Haiti Emergency Relief Fund for Employees, visit the Harvard University Credit Union Web site.