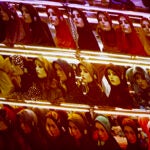 As a teenager in Iowa, Briget Ganske discovered the magic of photography through a camera she borrowed from her grandparents. Now she has infected Salvadoran youth with her photographic bug.

Ganske HGSE ’10, who is in the Arts in Education Program at the Harvard Graduate School of Education (HGSE), embarked with other HGSE students during their January break to El Salvador on a mission involving Learning Through Libraries (LTL), a student group and literacy project founded by Jill Carlson ’10, Debra Gittler ’10, and Eleanor “Nell” O’Donnell ’10, all from HGSE. For a week, these HGSE students worked in three schools in Caluco, El Salvador’s poorest municipality, providing literacy training to local teachers and helping to establish three libraries with more than 2,000 donated books.

Wanting to come up with creative ways to engage local children, whose schools had no running water or electricity, Ganske procured digital cameras to educate through storytelling and art. “These kids had never used cameras before, never taken a photograph,” recalled Ganske inside the Gutman Library lobby, where the students’ photographs reside in a special exhibition titled “From Cambridge to Caluco,” on view through March.

“First, we practiced technical aspects, like turning the cameras on,” said Ganske. “They were just so excited to use this technology.”

LTL forged a partnership with art students from the Escuela de Comunicacíon Mónica Herrera in the capital city San Salvador, who then paired up with the younger students as photography mentors. Making lists of what they found important in their lives, the students explored their village and were encouraged to photograph whatever they found meaningful.

“The idea of photographing their daily life was really exciting,” said Ganske. “The kids had so much fun. It was really quite inspiring to see their enthusiasm.”

Life through young eyes was poetically rendered. In photographs featuring primarily family, the students captured their subjects with inherent purity, unblemished by age or self-consciousness. In a photo by a student named Maria and titled “Madre y Hermanita,” a mother’s outstretched arms bear an infant daughter. Kids play by the trees overlooking a river in Karla’s “Amigas y el Rio.” In “Tia” and “Abuelo,” Susana captured her aunt and grandfather in unadorned, but striking, portraits.

“We also experimented with angles, distance, composition, and lighting,” said Ganske, whose lessons were particularly evident in the playful works of a student named Victor. “Cerdo” showcases a pig, his snout in the dirt, dappled by shadow and light. Victor’s other photograph, “El Campo,” displays a diffused sugarcane field with a path emerging into a bright meadow.

The photographs are simultaneously being exhibited in San Salvador, where the students from Caluco traveled to attend their first art opening, which happened to be their own.

What began as a kernel of an idea by Carlson, Gittler, and O’Donnell — who were eating sushi when they decided they wanted to do something significant over their monthlong break — the LTL project now has lasting implications for HGSE. The students involved are hoping to implement the project as a January term course, and are currently negotiating with HGSE administration.

“We don’t consider ourselves to be done,” said Gittler.

Their sushi-fueled idea led to raising $5,000 and collecting a bevy of books, aided by students from Cambridge’s Amigos School and Martin Luther King Jr. School, who gathered hundreds of texts to be sent to El Salvador. LTL purchased high-quality Spanish literature at half-off from Scholastic Books, and the material was shipped for free, thanks to TACA Airlines. Two more libraries are slated to open in Caluco before the semester’s end.

Ganske, who is graduating in May, will most likely stay in Boston to pursue other educational and photographic opportunities with youth. She said her trip to El Salvador was humbling and inspiring.

“The kids realized they too had a story to tell, and that people were interested in their lives and how they saw the world,” she said. “That’s the power of photography: for the artist, the power of self-expression, and for the viewer, the power of connection and understanding.”

Through the eyes of children: A Salvadoran snapshot