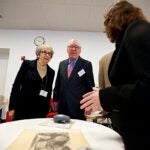 A celebration of substance

Two prominent theater producers, one from London’s famed Royal Court Theatre and one from Broadway and Broadway Across America, have been named to new leadership posts at Harvard’s American Repertory Theater (A.R.T.) by Artistic Director Diane Paulus. Diane Borger has been named A.R.T. producer and Tiffani Gavin has been named the director of finance and administration at the A.R.T.

Diane Borger joined the A.R.T. last fall as the executive producer for “Sleep No More,” and will now be taking on the full-time position of producer for the A.R.T. Borger spent over a decade as general manager at the Royal Court Theatre in London, where she produced more than 150 productions, including “The Seagull,” “Rock’n’Roll,” and “The Weir,” which she also transferred to Broadway in New York.Previously, Borger spent 13 years as deputy head of the Great Britain’s National Theatre of Studio, where she oversaw the readings and workshops and classes for some of the most prominent playwrights, actors, and directors in the United Kingdom. Borger has a master of arts in theater from Ohio State University. Now, 30 years after moving to London to begin a career in British theater, she returns to the United States to take on the mantle of producer.

Tiffani Gavin most recently served as the senior director of professional licensing at Theatrical Rights Worldwide, where she engaged in strategic planning, branding the company in a competitive marketplace and marketing the artists’ work represented by the company.

Prior to that work, Gavin was the executive producer for Clear Channel Entertainment, where she focused on business development and was responsible for executing the day-to-day activities of administering Clear Channel’s Broadway and off-Broadway shows. She was the architect of the “Urban Broadway Series” project that focused on reaching out to and introducing more diverse audiences to the theater. After graduating from Brown University, Gavin began her theater career at the New York Shakespeare Festival/Public Theater. Later, she was company manager for Blue Man Group and spent two seasons as engagement manager for the multiple national tours of “Phantom of the Opera.”

Borger and Gavin are joining the A.R.T. at a key juncture as the theater rides on the success of Paulus’ inaugural season as artistic director and gears up for “Johnny Baseball,” the world premiere of the new musical about the Red Sox, among other plans for next season.

“After an extensive national search, and the review of literally hundreds of highly qualified candidates, I am honored to be moving forward with an executive team of this caliber and experience. I have every confidence that Diane and Tiffani are the right people to lead the theater in this transformational moment,” said Paulus. “As we work towards expanding the boundaries of theater, and revolutionizing the theater experience, I am so thrilled to have Diane and Tiffani as part of the leadership of the A.R.T.”