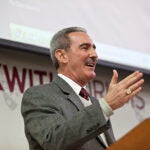 HAYNEVILLE, Ala. — One afternoon this week, George Thampy ’10, a chemistry concentrator, joined four other Harvard undergraduates on a low scaffold at a nearly completed church in this small south-central Alabama town. Their task was to screw a heavy wood panel onto the rafters.

Thampy stretched both arms wide. When the board still wobbled, he did what any good Harvard student would: He used his head.

The Mather House senior won’t always be working on scaffolds. After graduation, he plans a career in finance. But this week he is one of 22 Harvard undergraduates using their Alternative Spring Break to do finishing work on a new Hayneville Church of Christ. The original burned down, an arson target, in 2008. Said Thampy, “I’m irrepressibly happy to be here.”

The Harvard workers are along on one of 10 domestic public service trips sponsored this year by the Phillips Brooks House Association (PBHA). They made the 21-hour drive to Alabama in three PBHA vans.

Along the way, Emmett Kistler ’11 stopped in his native New Jersey to renew his license so he could help with the driving. “For us, this is grounding,” said the Eliot House junior. “You get down here, and it’s revitalizing.”

There’s more, too. “Before I got here, I didn’t know how to swing a hammer,” he said.

“It’s fun to do something tangible,” said Marcel Moran ’11, one of four co-leaders on the Hayneville trip. “It’s using your brain in a whole new way.”

This week, students are tackling a wide range of construction work, painting, staining, tiling, putting up sheet rock, installing siding, and building scaffolds. “We’re at the finishing steps of this church,” said Moran, a pre-med student on his third service trip. “So precision is the key.”

There were three volunteer experts on site Tuesday (March 16). “We do the work,” said Moran, “but they’re showing us how to do it.”

Standing nearby in the carport was William “Bill” Gorsline, an Illinois information technology consultant and volunteer carpenter. “They send us pretty talented kids,” he said of the PBHA workers. “They can’t get enough of this. They want to learn it all.” He was working with two other experienced construction mentors, Joe Piekos and George Holtz.

Gorsline, who volunteers on behalf of St. Isidore Parish in Bloomingdale, recognizes that other kinds of learning are going on too. He took his own children on a work trip to the Gulf Coast following Hurricane Katrina. “They were in tears for the whole week, “ he said.

Joseph Gaspard ’12, a government concentrator, was cutting tile on a wet saw. It buzzed and whined, and a cloud of mist shot from the back. “This is more hands-on than I’m ever going to get,” he said. Careful and intent at the saw, Gaspard wore an Adams House T-shirt, old jeans cinched with kneepads, safety glasses, and a dust mask.

This is better than a standard break, he said, because, “I’ve done the whole sitting-on-the-beach thing before.”

Will Quinn ’10 of Winthrop House braced his feet and lowered a portable cement mixer into a 5-gallon bucket. It was his second PBHA alternative spring break trip, he said, but his first time using a cement mixer. Quinn pressed the trigger, and a sheet of gray slurry sloshed over the wrists of Trevor Bakker ’10, who had crouched to steady the bucket.

Bakker has applied to Oxford, where he plans to pursue a one-year master’s degree this fall before embarking on a career of human rights law. Meanwhile, he is learning how to lay tile. Does that compare to studying governments? “Certainly, there is little room for error in tiling,” said Bakker.

Tim McCarthy ’93 looked in on the cement mixing. This is the 12th PBHA service trip he has directed, all in the South and all to rebuild churches. McCarthy, a big man in a tails-out white shirt and a ball cap, is a lecturer in history and literature and public policy at Harvard and director of the Human Rights and Social Movements Program at the Harvard Kennedy School’s Carr Center.

He started taking such trips as a graduate student at Columbia University. “I was really transformed by the experience, and found my herd, so to speak,” said McCarthy.

In the spring of 2001, he led Harvard’s first Alternative Spring Break trip, and has since squired hundreds of undergraduates — “some of Harvard’s best souls,” he said — on similar work trips. “I’m on my own spiritual journey,” said McCarthy. “This is part of it.”

There is time on these trips for intellectual engagement too. At one point, McCarthy stood in the unfinished carport for an animated conversation with three students. “We were trying to solve the affirmative-action problem,” he said later of the discussion, while heading back to work. “Now we’re going to put up a ceiling.”

To get to Hayneville, population 700, you drive down Lowndes County Route 26. Two lanes of blacktop cut through a screen of sticklike trees hung with Spanish moss. Just beyond the trees are placid creeks, pale yellow dirt driveways, neat doublewides, sparkling ponds, and rolling acres of pasture for goat, cattle, and horse farms.

But Hayneville wasn’t always a crossroads in picture-book farmland. It is a former Ku Klux Klan stronghold, 20 minutes by car from Montgomery, the first capital of the Confederacy. It is a few minutes south of where the Selma protest march broke the back of Jim Crow segregation in 1965.

Before then, said 57-year-old Martin McCall Sr., “I was scared to come to Hayneville because of the KKK. We got people shot right in the street here.”

McCall, pastor at Hayneville Church of Christ, said most church burnings in the South even today are racially motivated. But the 2008 fire that burned down the old church was “a break-in that went bad,” he said, set by a black man later convicted of the crime.

“They saved only the front porch,” said McCall of local firefighters, who kept running out of water. “It was horrible to watch.”

Building a new church  — brick and wood, like the old one — has cost about $260,000 so far, said McCall, a mason and carpenter who did much of the work himself. Insurance money helped, but so did $100,000 donated by local residents, “white and black,” he said.

The PBHA volunteers help too.

“I’ve never seen anything like this,” said McCall. “It’s like the angels from heaven came down and blessed the congregation.”