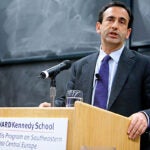 Critic says halting human trafficking ‘takes all of us’

Examples of modern-day slaves could be the workers who make our cotton shirts, pick cocoa for our chocolate, and harvest shrimp for our dinner plates while imprisoned aboard ships at sea. Enslaved prostitutes — more than 1.3 million worldwide — also provide the labor force for much of the world’s sex trade.

Modern slavery’s ubiquity — and our collective responsibility for it — were two of the messages driven home in an Institute of Politics lecture on Thursday (Feb. 18) at the Harvard Kennedy School’s John F. Kennedy Jr. Forum.

The man behind the messages was Luis CdeBaca, who directs the U.S. State Department’s Office to Monitor and Combat Trafficking in Persons. When he was a federal prosecutor, he sent more than 100 traffickers to prison and freed 600 sex and garment workers kept in involuntary servitude.

Worldwide, there are more than 12 million people who exist in some form of slavery, he said, part of a shadow economy that turns a $32 billion annual profit for traffickers. About a tenth of those are in what experts call “commercial sex servitude.”

Yet in a typical year, nations around the globe initiate only 3,000 prosecutions against traffickers,  “an unforgivably low percentage,” said CdeBaca.

Nations all over the world have to get to the root causes of human trafficking, he said, including understanding what creates the markets that make the practice viable. (So far, 136 countries have signed on to a decade-old U.N. protocol against slavery.) Stepping up criminal prosecutions is still a prominent key, said CdeBaca, along with a range of other strategies to “rescue and punish.”

He outlined a “3-P paradigm” for addressing human trafficking: prosecute, prevent, and protect.

CdeBaca was introduced by journalist E. Benjamin Skinner, a Carr Center Fellow this year and author of the 2008 book “A Crime So Monstrous: Face-to-Face with Modern-Day Slavery.”

Skinner’s research, conducted both in public and underground, took him to child markets, trafficking networks, illegal brothels, and other slave venues in a dozen countries in the Middle East, Asia, Europe, and North America. Even suburban America, he discovered, contains its own parallel universes of hidden slavery.

CdeBaca’s office every year rates nations around the world on their measures to fight slavery. The 2010 ranking — called the Trafficking in Persons, or TIP, report —will include the United States for the first time. That announcement drew a brief burst of applause in the crowded hall.

To illustrate the problem in the United States, consider the case of Shyima Hall, whose story was outlined in the 2009 TIP report. She was a teenager from a poor family in northern Egypt who was moved by a wealthy Egyptian couple to work in their California home. In exchange for up to 20 hours of labor a day, Shyima was locked in a windowless garage and paid $45 a month.

CdeBaca mentioned another case, one of an “escaped slave” who fled from virtual imprisonment in an Arlington, Mass., home. Her passport was locked in a safe.

He told other American stories: about the illiterate garment workers who studied the boss’ dictionary one word at a time to compose a note that they threw over a high wall. (They were rescued.) And the woman who rushed up to a policeman in a Dollar Store with a desperate plea to escape domestic servitude: “Arrest me.”

Modern slavery will prompt “the next great abolitionist movement,” said Skinner. He provided a chilling definition of modern slaves, who are so inadequately uncovered and protected: “Those forced to work, held through fraud, under threat of violence, for no pay beyond subsistence.”

Skinner acknowledged that slavery is a “contentious term” that some Westerners even sometimes equate to the drudgery of corporate jobs, mortgages, and credit card debt. But the world’s real slaves are “people that cannot walk away from their work.”

And the commercial enterprises that underlay slavery, Skinner said, potentially involve every consumer. To address the slave trade, he said, “takes all of us.”

Understanding modern slavery also invites comparison to the U.S. war on the drug trade, which has more resources and prominence, said Skinner. The annual budget to fight slavery, he said, is the equivalent to what is spent in a single day to combat trafficking in illegal drugs.

Prosecution alone is not enough to stop modern slavery, said CdeBaca, who called for protection that extended beyond the courtroom, including provisions for social services. Ignoring the victim after the crime, he said, would only “replicate” the way the victim was treated by a trafficker.

Meantime, there is the third “P,” said CdeBaca: prevention, which remains “an afterthought” to most nations. Real prevention means more than policy pronouncements, public-awareness advertising campaigns, or “interesting documentaries,” he said. It means stopping human trafficking at the source, in part by understanding the demands behind forced labor and commercial sex.

Stopping trafficking at the source is also a matter of awareness, said CdeBaca in discussing the imprisoned shirt-makers and shrimp fishermen. Just as people are now aware of their carbon footprint, he said, they should be aware of their “modern-slavery footprint.” That means taking a critical look at the goods and services they buy.

“The prevention-P,” said CdeBaca, “is where every American can play.”