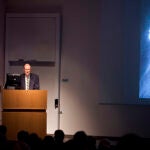 A quiet tradition, film series on women marks a decade at Radcliffe

Everyone knows the story of Rosa Parks. In 1955, she refused to give up her bus seat in Montgomery, Ala., to a white passenger, an act of defiance that became a symbol for the modern civil rights movement.

But few people know the parallel story of Ida B. Wells. In 1884, on a railroad car near Memphis, Tenn., she was ordered to give up her seat to a white passenger. Wells refused, and it took three men to remove her.

What happened in that railroad car became part of “Ida B. Wells: A Passion For Justice,” a 53-minute documentary released in 1989. Fragments of it were shown recently at the Arthur and Elizabeth Schlesinger Library on the History of Women in America.

The showing was part of a little-known but long-running Radcliffe film series, “Movie Night at the Schlesinger Library,” a quiet tradition that rarely fills the 30 chairs in the Radcliffe College Room. In its present iteration, the monthly program started in 2000 and — with a two-year break for library renovations —has run ever since.

Showing one long film was once the norm, said Schlesinger audiovisual cataloger Melissa Dollman, but this year’s series has screened short films related to the library’s collections. Showing with “Ida B. Wells” was “Jeannette Rankin: The Woman Who Voted No,” a 30-minute PBS documentary on the sole member of Congress who voted against entering both World War I and World War II.

Rankin was a lifelong pacifist and peace activist. Her last antiwar effort targeted the Vietnam War. The film showed an antiwar rally. “They can stop the war,” Rankin said simply, by “not supporting it.” Then came a shot of her being helped into a police wagon.

The movie series offers advantages. It’s an intimate venue, with the chairs arrayed in rows of five. It offers unusual fare. One of the next films, playing March 3, is “We Dig Coal: A Portrait of Three Women.” And each set of films comes with expert commentary.

Holding forth on Wells (1862-1931) and Rankin (1880-1973) were Schlesinger manuscript catalogers Marilyn Morgan and Emilyn Brown, both members of the film committee that makes selections for movie night.

Brown outlined Wells’ remarkable life: born the year before emancipation, a teacher by age 14, and a Memphis journalist in her 20s who campaigned against lynching and racial violence. Harried out of the South, Wells settled in Chicago, where she married and continued a restless campaign for racial and gender justice.

Wells, a founder of the NAACP, was a friend of leading feminist and rights leader Susan B. Anthony. (Anthony was disappointed when Wells decided to marry and raise a family.)

Rankin was the first woman elected to Congress. On her first day in office (April 2, 1917), the Montana Republican voted against America’s entry into World War I. Though joined in her opposition by 49 males, the move temporarily cut Rankin’s political career short and branded her — in the words of a contemporary — “weak and sentimental.”

Rankin’s pacifism grew between the wars. By 1940 she had been elected again, this time on an antiwar platform. When Rankin voted against America’s entry into war in December 1941, this time she cast the lone dissenting vote. It was an act that for years after brought her hatred.

Both Rankin and Wells, despite their accomplishments, rich lives, and one-time fame, are little known now. “A lot of people get written out,” said Morgan, who has a doctorate in history.

“We have figures who have become obscure,” said Brown of Wells and Rankin. And yet, she added, “They have laid the foundations we stand on.”