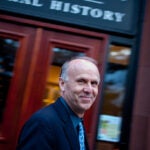 The best scientific insights, which ultimately may lead to
the solution of the world’s great puzzles, do not always come from the experts
in the fields in question. Sometimes they come from outliers who approach a
problem from an entirely new perspective — just as unknown English clockmaker
John Harrison demonstrated that longitude could be determined by using an accurate
timepiece and not, as almost all experts predicted, by the study of astronomy.

So suppose the intellectual power of the entire Harvard
community, more than 55,000 faculty members, students, and staff members, in
all of the University’s schools and affiliated hospitals, was applied to a
medical problem?

That is the premise of an innovation contest launched by the Harvard Catalyst, an
online hub for cross-disciplinary scientific work. The challenge is to define
new hypotheses and unaddressed questions concerning type 1 diabetes. The best
new ideas will receive prizes ranging from $2,500 to $10,000.

TO PARTICIPATE
IN THE CHALLENGE, GO HERE

In an email to the entire Harvard community, Jeffrey Flier,
dean of the Harvard Medical School (HMS), and Lee Nadler, dean for Clinical and
Translational Research and director of the Harvard Catalyst, wrote:

“Growing evidence shows that innovation often happens at the
intersections of disciplines, frequently initiated by individuals who may not
have expertise in the exact problem at hand. Innovation contests have
incentivized cross-disciplinary knowledge sharing and solution development for
scientific problems in non-academic communities. Supported by an ARRA grant,
several Harvard University schools and InnoCentive.com (a global platform for
innovation contests) are launching a series of such contests in the area of
health-related innovation.

“For our first challenge, we are asking the Harvard community to share
‘out of the box questions and proposals” related to any of the many facets of
juvenile (type 1) diabetes. We seek testable questions and ideas about type1
diabetes that could help define problems or new areas requiring exploration and
research. Type 1 diabetes was selected because it carries enormous
medical and socioeconomic consequences.  This challenge solicits your
ideas but does not require that you have the expertise, laboratory or other
resources to answer the question. We are excited by the possibilities of this
experiment, and ask you to participate by applying your insights to a problem
that may not be in your domain.  We also encourage diabetes specialists to
propose their unexplored ideas.”

Eva C. Guinan, director of the Harvard Catalyst Linkages
Program and an associate professor of pediatrics at HMS, who is working closely on the project with Karim Lakhani, an Assistant Professor at Harvard Business School, said, “This experiment
solicits ideas from everyone in the community, regardless of their field of
expertise and independent of their ability to undertake the research project
themselves. While this sort of approach has been very successful in the
for-profit world, we need to explore how to best implement it in our
community.”

In a cover email accompanying the Flier-Nadler
email, Harvard President Drew Faust offered the hope that “many of you will
participate. Even more,” Faust wrote, “I hope that, in the spirit of this novel
project, we will continue to multiply the means to connect the remarkable
people and ideas across Harvard in imaginative and powerful ways.”

Doug Melton, co-director of the Harvard Stem Cell Institute
and a scientist whose research is focused on type 1 diabetes — a disease that
afflicts his son and daughter — praised the challenge, saying “It will
potentially bring hundreds of fresh sets of eyes, with radically different
perspectives, to a problem that has long stymied researchers and impacts the
lives of millions.”

At the most basic level, the idea is that somewhere in the
vast Harvard community there may be something like a pre-doctoral candidate in the
humanities who has a child with Type 1 diabetes, and has an astute observation
about the disease that he has never been able to share with anyone in diabetes
research. Or there may be a chemist who has made an observation that is
directly applicable to diabetes research, but because her work has nothing to
do with diabetes, that connection never occurred to her.

Lee Nadler called the innovation challenge — the first of
what it is hoped will be many such challenges — “an exciting experiment, and
unlike most conventional experiments, we know that at least one outcome will be
positive.”

“I have no question,” Nadler said, “that this challenge will
advance the Harvard Catalyst’s primary goal of drawing researchers all across
the University out of their individual disciplines to think about problems more broadly, in
multi-disciplinary ways. We cannot predict whether this will produce ideas that
will impact diabetes, but it will teach us whether broadcast search is a viable
addition to our approaches to solving complex problems.”

Dean Flier, whose research career has been focused on the
seemingly intractable challenges posed by diabetes, said he is “excited on two
levels by this exciting Harvard Catalyst challenge. As a scientist, I see this
having the potential to bring the intellectual power of some 55,000 members of
the greater Harvard community to bear on the puzzle of diabetes, increasing
exponentially the possibility someone will come up with innovative ways to
solve some of the problems of diabetes once and for all. And as dean, I
see this experiment in open innovation and scientific social networking as yet
another innovative approach by the Harvard Catalyst to increase the power of
collaborative science and translational research at Harvard.”