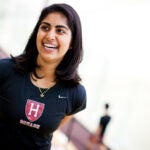 The patient groaned as Shahram Aarabi pressed firmly but gently on his stomach, applying a clean dressing over the incision through which the Harvard School of Public Health student and surgical resident at the University of Washington had removed a burst appendix the night before.

Aarabi and Jason Smithers, a pediatric surgeon at Harvard-affiliated Children’s Hospital Boston and an instructor in surgery at Harvard Medical School, worked as a team on the man, one of three patients they had operated on the night before. Darkness had fallen, and the two were among volunteer medical personnel staffing the night shift at Port-au-Prince’s largest hospital, providing badly needed care for residents of Haiti’s earthquake-devastated capital and filling a personnel hole as Haitian hospital staff returned to day-shift jobs.

Smithers and Aarabi are among the many Harvard-affiliated personnel — doctors, nurses, and medical technicians — who have responded to the titanic medical emergency created by the Jan. 12 earthquake that devastated the island nation.

During a week in mid-February, Aarabi and Smithers made their rounds under the auspices of Partners In Health, a nonprofit with close ties to Harvard Medical School (HMS), the Harvard School of Public Health, and Harvard-affiliated Brigham and Women’s Hospital, while nurses from Beth Israel Deaconess Medical Center worked alongside physician Jennifer Scott, a specialist in humanitarian response, on outreach operations at a field hospital led by the Harvard Humanitarian Initiative at Fond Parisien, an hour’s drive away.

Tom Monaghan, a medical equipment technician from Harvard-affiliated Massachusetts General Hospital, worked in Port-au-Prince to set up newly arrived equipment and to repair broken machines, while Natasha Archer, a Brigham resident whose family immigrated to the United States from Haiti decades ago, coordinated volunteers for Partners In Health in Port-au-Prince, using vacation time to extend her stay.

Working next to the Harvard-affiliated volunteers are skilled medical personnel from an array of institutions across the country. Volunteers from the University of Chicago Medical Center, Northwestern University, the Children’s Hospital of Philadelphia, and the University of Miami work alongside a retired orthopedic surgeon who is lending a hand, along with independent physical therapists who are getting patients up and walking again, and a former Peace Corps volunteer helping with logistics at Fond Parisien.

The initial tidal wave of the injured has eased, after washing over Port-au-Prince’s University Hospital and out to places like HHI’s Fond Parisien field hospital, which specializes in rehabilitation after initial treatment. But the need for medical volunteers remains acute. Hilarie Cranmer, an assistant professor at HMS and HSPH and an HHI-affiliated faculty member who is directing the Fond Parisien field hospital, said the focus has moved from amputating limbs to saving them.

With a devastated infrastructure and the personal toll the earthquake took on Haitian medical staff, skilled volunteers still are needed to meet medical needs of survivors living in and around Port-au-Prince as they begin to rebuild their lives.

Partners In Health, founded decades ago as a health organization with operations largely in Haiti, has brought to Haiti roughly 300 medical personnel — many from Harvard — to augment their nearly 4,000 Haiti-based staffers.

“I’m pretty proud of Harvard’s response,” said Paul Farmer, the Maude and Lillian Presley Professor of Global Health and Social Medicine who co-founded Partners In Health and who, among the many hats he wears, is also the United Nations deputy special envoy to Haiti.

Though the volunteers’ stays are temporary, their experience teaches enduring lessons and carves indelible marks on them. Dima Awad, a clinical pharmacist at the University of Chicago Medical Center who arrived to help at Fond Parisien, was met with a room full of donated drugs and medical supplies, some years out of date, and tasked with creating a pharmacy. She thought the job impossible, but set to it with the help of local carpenters who created shelves in what had been an orphanage classroom. Nine days later, Awad was low on sleep, but reflecting on success.

“When I got here, I thought this was an impossible job,” Awad said. “After working on it, I can tell you nothing is impossible, it’s all a matter of will.”

Anthony Croese, a paramedic from New York Presbyterian Hospital, spent a week at Fond Parisien traveling with colleagues to satellite sites to deliver care, identify patients who needed to be brought to the hospital, and provide vaccinations. He said they saw a lot of infections, respiratory problems, abdominal problems, and fevers.

“This is definitely going to leave its mark. I don’t think I can ignore something like this again.” Croese said. “I’ll be back, whether I have to take vacation time or use my own money…. This is way beyond what you see in the news.”