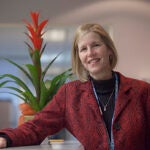 The hunt for healthy answers

Two whale skeletons last displayed in the 1930s at the Harvard Museum of Comparative Zoology (MCZ) were given new prominence in January, after they were taken from the MCZ’s dusty attic, cleaned, and moved to the pristine lobby of the new Northwest Laboratory building next door.

Though they ended up less than 100 yards away, the specimens, a 21-foot killer whale and a 24-foot northern bottlenose whale, made a long trip to get there. They were first shipped to the Maine offices of Whales and Nails, a specialty preparation firm that cleaned, repaired, and then installed the specimens.

MCZ Director James Hanken, Alexander Agassiz Professor of Zoology, was enthused about the installation, saying it serves several purposes: opening part of the MCZ attic, restoring the two specimens, displaying them publicly, and enlivening the Northwest Building’s lobby. Over the next few months, signs and lighting will be installed to complete the display.

Hanken, who had a hand in planning the Northwest Lab because there is MCZ collections space in its lower levels, said he was an early proponent of the whale installation.

“We’ve been anxious to get our materials out of the attic for several years,” Hanken said. “It’s not too often you come across a space where you can display a whale.”

The skeletons were removed from the MCZ in July and sent north, where they were slowly cleaned and prepped for display. The installation, coordinated by Linda Ford, MCZ director of collections operations, was delayed by a snowstorm but ultimately went ahead in late January. The specimens were hung in the lobby stairwell, the bottlenose whale arranged in a twisting dive down to the lower level, while the killer whale is posed in a jumping breach position, its toothy skull visible through the building’s windows.

Though the diving and breaching positions are unusual ways to display such specimens, Hanken said they were chosen because they show the animals in more natural postures than their original straight positions.

The killer whale — the largest member of the dolphin family — is the older of the specimens and was collected near the Faroe Islands in the North Atlantic in 1881. The bottlenose whale, a small, deep-diving whale related to the sperm whale and once prized for its oil, was collected in the 1930s, also near the Faroes.