Listen to the people 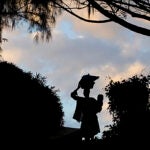 Getting Haiti to stand again

Republican chairman Steele says leaders ignore them at their peril

Americans’ surging political discontent has been years in the making, says Republican National Committee Chairman Michael Steele. The rising unrest, Steele told an audience at the John F. Kennedy Jr. Forum on Wednesday (Feb. 3), is a response to those leaders who have failed to listen to the American people.

From 1994 to 2006, he said, party leaders turned inward and “became more concerned with the wheels of government and the consumption of government than … with productivity and the ability of individuals to do their own thing. This environment has been under way for some time.”

As a result, Steele argued, the country experienced two major recent political shifts. In 2007 and 2008, a wave of enthusiasm “unlike anything the country has seen” brought young people out to the polls in record numbers and swept Barack Obama into the White House and Democrats into solid majorities in both houses.

A year ago, Steele told the audience at the Harvard Kennedy School, the conventional wisdom posited that the GOP was badly wounded, and would remain so for some time. Yet in recent months the Republicans have won governorships in New Jersey and Virginia and a Senate seat in Massachusetts, one held by Democrats for more than a half a century, and for more than 40 years by liberal leader Ted Kennedy, until his death.

Dismissing the contention that the Republicans’ protesting tea party faction is made up of “right-wing ideologues,” Steele described the movement that emerged last summer, in response to the health care reform initiative, as relevant and important. Its members, he said, are average citizens who are taking control and shaping the national agenda. They are demanding that someone address their concerns, someone who understands “what my walk is all about,” he said. “There is a certain dynamism that is beginning to explode across the country, and the political elite is largely clueless to it.”

Recalling advice from his mother, a sharecropper’s daughter and laundress for 45 years who never made more than $3.83 an hour, Steele said political leaders need to know when to “shut up and listen.”

A former Maryland lieutenant governor and the first African American elected to statewide office there, Steele described a good leader as “someone who leads with a sense of decency and purpose, and who knows how to follow first.”

“Put yourself second to what is in front of you. It’s a difficult thing to do,” he said. “Don’t lose sight of why you want to serve in the first place, because the moment you lose that, the rest doesn’t work.” It’s important to remember “that flare that ignited your passion.”

The forum was sponsored by the Institute of Politics.