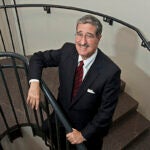 The Islamic Heritage Project, a unique and extensive collection of Harvard’s vast Islamic material — including more than 260 lushly illustrated manuscripts, 50 maps portraying the world as once imagined, and 270 rare printed texts — is now easily accessible through the Internet.

Gathered from across Harvard’s libraries and museums, the collection offers rich insights into a complex culture and history, in an innovative collaboration between the Harvard University Library Open Collections Program and the Prince Alwaleed Bin Talal Islamic Studies Program (ISP).

Founded in 2005, with support from Prince Alwaleed Bin Talal, ISP enhances Harvard’s ability to keep pace with increasing demands for knowledge and understanding of the Islamic tradition. By bringing together faculty, students, and researchers from across the University and coordinating their activities through a program in the Faculty of Arts and Sciences, and in close cooperation with the Harvard Divinity School and other faculties, the Islamic Studies Program demonstrates Harvard’s strong commitment to the study of various religious traditions.

A Harvard faculty committee comprised of Islamic experts culled through the University’s vast holdings to assemble the collection, which includes more than 145,000 pages of material from the 13th to the 20th centuries.

Searchers can browse the comprehensive database by selected topics that include mathematics, grammar, logic, and literature. Locations represented in the collection range from Saudi Arabia and North Africa to Iran, Iraq, and Central Asia. Languages in the collection include Arabic, Persian, Malay, Urdu, Ottoman Turkish, and a few Western ones.

The collection is intended to share an important facet of Harvard’s intellectual treasures on a digital platform that organizers say will support teaching and research in Islamic studies and in all the world’s religious traditions.

“For me, it’s so crucial for people around the world, who don’t have easy access to the kinds of resources that we have at Harvard, to be able to take advantage of our rich collection of materials,” said William Graham, Albertson Professor of Middle Eastern Studies in the Faculty of Arts and Sciences, and O’Brian Professor and dean of Harvard Divinity School. “This kind of project is emblematic of what Harvard is truly about, advancing knowledge and making new knowledge and materials available freely in the scholarly world, and using our resources to help everybody in the field.”

Every item in the online collection was reviewed and catalogued; some also received conservation treatments at the library system’s Weissman Preservation Center.

The new collection is a treasure trove of ancient documents that offer a window to history. A search on the Ottoman Empire reveals, for example, a colorfully delineated chart of the Turkish Empire in Europe, Asia, and Africa printed in England in the early 1700s. A section of the chart, covered in elegant script, reads, “The Turks oppress the Arabians with Tribute, and Govern ’em with great Cruelty, which has made them several times attempt to throw off their Yoke, but in Vain.”

Searchers looking for poems can find a collection of work from 1278 written by Mahmud Afandi al-Jaza’iri. Translated, the work’s title reads: “This is a collection of extraordinary poems in rhymed couplets and elegant and cherished odes on love which refresh the hearts of lovers and for which every longing man pines in joy.”

The collection is “an important scholarly tool and an important tool for the visual book culture of the world,” said Roy Mottahedeh, Gurney Professor of History and founding director of the Prince Alwaleed Bin Talal program. He noted that materials in the database also reveal the far reach of Islamic literary culture.

An 18th century Indian copy of the Persian national epic “Shāhnāmah” by the Persian poet Firdawsi, for instance, is “an interesting testament to the way in which earlier traditions of international languages helped to transmit cultural ideas such as epic poetry.”

Since its official launch late last year, the site has had more than 6,000 unique visitors. For January, the countries with the most visitors to the site were the United States, Saudi Arabia, Iran, Kuwait, Canada, the United Arab Emirates, Turkey, and Morocco, with each country logging more than 1,000 page views.