Getting Haiti to stand again 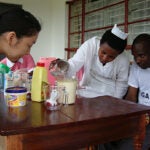 Break, but no vacation

Experts, Harvard authorities probe what needs to happen for Haiti

Even before the devastating earthquake on Jan. 12, Haiti was in deep trouble. It was the poorest country in the Western Hemisphere. Most people lived on less than $2 a day, and only a third had formal jobs. In 2008, four successive hurricanes had ruined 60 percent of the country’s harvest and its already shaky health infrastructure. Barely half of the children were immunized, malnutrition stunted the growth of 20 percent of them before age 5, and the average family of seven slept in one room — a trigger for infectious disease.

Then came even greater trouble: a 7.0-magnitude earthquake that in minutes killed many thousands of Haitians and injured many thousands more. The quake left three million Haitians needing emergency aid. Hundreds of thousands still sleep outdoors, fearing aftershocks or lacking shelter, and many more are fleeing to the countryside, which may soon be overwhelmed. Food, water, sanitation, housing, and security remain concerns.

About 600 small-scale tent cities will soon shelter the homeless from seasonal rains due in April, replacing what Harvard physician Joia Mukherjee, chief medical officer at the Harvard-affiliated Partners In Health, called the “sheet cities” thrown up in haste atop rubble.

In the face of such apocalyptic disaster, what should be done to help, now, in six months, and in a decade? The Harvard Gazette asked Harvard experts for their insights.

A few lessons have already emerged. For one, send cash, not goods. Get the money directly into Haitians’ hands. Expand health care capacity, including postoperative care, mental health, and physical rehabilitation. Most important, let Haitians oversee the long-term rebuilding of their nation.

Creating safe schools and safe hospitals, even makeshift ones, is a known need in rebuilding a society, and storm-resistant housing must also be a carefully considered priority, since there is little time before the rainy season. Students need to be back in school. The planting season cannot be missed and requires fertilizer, seeds, and tools.

Haiti will continue to need the contractors, and the NGOs and mission groups, but, more importantly, we will need to create new ground rules — including a focus on creating local jobs for Haitians, and on building the infrastructure that is crucial to creating sustainable economic growth and ultimately reducing Haiti’s dependence on aid.

Debt relief is important, but only the beginning. Any group looking to do this work must share the goals of the Haitian people: social and economic rights, reflected, for example, in job creation, local business development, watershed protection (and alternatives to charcoal for cooking), access to quality health care, and gender equity.

Excerpted from Paul Farmer’s Jan. 28, 2010, testimony on Haiti to the U.S. Senate Committee on Foreign Relations. To read the whole testimony, go to StandWithHaiti.org.

Jean-Philippe Belleau
Anthropologist, fellow at the Humanities Center at Harvard, who just returned from Haiti

The international community needs to recognize that the Haitian state no longer exists. Its destruction was started 50 years ago, and now has come to fulfillment. The population recognizes the impossibility of the authorities to provide a response to the country’s disarray and to coordinate international efforts.

The international community also needs to look at the 2004 and 2008 relief efforts in Haiti, the United Nations presence (at $600 million a year), and the billions of dollars spent since 1994. Without a look back, aid will again be swallowed by a gigantic black hole of misunderstanding, corruption, and incompetence. Past arrangements between the Haitian state, multilateral organizations, and foreign governments created a Tower of Babel that failed miserably. Recycling the same projects with the same ideas and the same methods will only guarantee failure.

The first step? Create a centralized command structure composed of the few most dedicated countries and of Haitians invested with the highest authority. Then focus on infrastructure, education, and land planning.

And listen to Haitian intellectuals, which foreigners rarely do. They have ideas and a social conscience. Ignoring them is anti-intellectual and imperialistic.

Haiti is in need of strong governance to coordinate the wide array of available assets being deployed for transition into a developmental effort. Medical and surgical teams from all over the world will soon disappear. Afterwards comes the need: to plan huge displacement centers with many nongovernmental organizations; to plan city and community reconstruction efforts with U.N. and military resources; and to provide contractors.

Relief and development efforts must get under way at the same time. Haiti needs temporary potable water supplies and food distribution for displaced populations, but it also needs permanent municipal water and sanitation systems. Relief agencies are excellent at relief efforts for displaced populations over the short run. But reconstruction and infrastructure development (roads, electricity systems, etc.) will require a huge effort from U.S. military and private contractors.

One key to success is political will. Both donor nations and Haiti’s leadership need to support “building back better,” which will stabilize the situation for many injured and displaced Haitians. That’s important to avoid insecurity or mass migration.

The United Nations will be less involved in long-term rebuilding issues. The private sector could play a big role here.

Haiti’s rainy season begins in April. In the face of imminent rains and hurricanes, providing shelter and adequate infrastructure for the displaced population of Port-au-Prince are critical.

The physical interventions needed could clear an alternative path to socioeconomic recovery. About 600 makeshift tent cities going up in the countryside will house a million refugees. These new housing centers will likely remain there for a long time, but they will also bring resourceful workers to the countryside who can improve its agriculture. These tent cities could become the nuclei for the rejuvenation of the rural economy and of the whole country.

Without diminishing the importance of a long-term plan for Port-au-Prince, efforts should focus on building roads to the tent cities and providing safe, collective roofs over the refugees’ heads. They will need generators, latrines, common kitchens, medical services, and schools.

Around the centers, basic housing units should then be provided to replace the tents. Residents could expand their houses as they invest the returns from their work in agriculture, construction, and administration. A new economy with a polycentric distribution could emerge, and help Haiti transcend the rural-urban imbalance that devastated the country well before the earthquake.

The humanitarian response has to be swift, decisive, and coordinated. The incoming responders must be self-sufficient, collaborative, and focused on immediate need because the Haitian authorities are not yet able to manage the situation. Typically, landscape-scale disasters exponentially magnify pre-event systemic vulnerabilities; this is evident in the situation at hand.

The immediate order of business is complex. Restoring critical lifelines — water, communications, fuel, power —must be a first priority. Medical services and emergency housing must follow close on.

Haitian authorities need to reconstitute the continuity of government for the nation. Strengthening the social connections among people is crucial to rebuilding hope and purpose for those devastated by the earthquake. The disaster literature shows that typically 10 years is the period for a region to recover from catastrophe. Haiti will likely follow this trajectory. Social and political reconstitution will emerge with support from responding nations in the form of governance guidelines, social-institution building, and development of safe building practices. Such measures have successfully been implemented in the wake of disasters in the last 20 years.

Haiti needs sustained local leadership development. In the end, only so much can be done from outside the country. Disparate recovery rates in different parts of New Orleans teach us that the quality of local leadership — the ability to understand the continuously evolving challenges of building a recovery, and the ability to adapt to those challenges — is the essential key to successful recovery. Development of repopulation and community planning must be indigenously owned and driven.

Haiti will be in recovery for years and years … Recoveries can go well or very badly. The difference is driven by the ability of local leadership to learn its way through the problem and to catalyze and direct outside assistance. In Haiti’s case, this is all yet to be seen. And if we aren’t careful and vigilant and focused, the outside assistance part of this will disappear before it begins.

Recovery won’t begin in any serious way for weeks or months, and will go on for years. … and, at this point, significant international engagement is a fragile hope.

Unfortunately, Haiti is going to look a lot like Cambodia looked after the war. We’re going to be a nation of amputees. This is on top of a population that is in desperate need of jobs, at baseline. Add to that, there is a huge amount of psychological trauma. We have inadequate kinds of support for the long-term needs of a population that is this wounded, this traumatized.

Harvard and other universities … have really stepped up enormously in improving and supporting and accompanying the overall education structure for medical professionals. [It’s important] that we use some of this attention [so] that 10 years from now we have really state-of-the-art facilities to do global health.

[It’s also important] to focus relief dollars coming in, getting [them] into the hands of people in their community, whether it’s by hiring community health workers or creating small-scale agricultural projects, things that will really help create the microeconomy that’s needed.

Livelihoods are a major issue. It’s really important to assume the quickest recovery is going to be [the result of] more Haitians who have money in their pockets, not more relief organizations.