Break, but no vacation 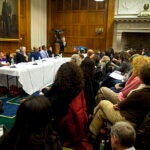 The year-old boy had been abandoned at a rural hospital in Uganda’s poorest district. His mother, who showed up days later after a change of heart, was just 17 herself and told the Harvard students visiting there that she had been forced to abandon him by his father.

Two Harvard undergraduates said their conversation with that young mother one evening in January made an indelible impression on them during a winter break trip to Uganda to work on a project to fight malnutrition. The conversation helped them to understand the challenges and struggles of those living far from Harvard’s academic halls.

“I saw a child who’s helpless. He hasn’t made any decisions in life yet, and he’s put in this situation,” Harvard junior Gordon Liao said. “That’s what motivates me to do this project. There are children who have no choices.”

Liao and senior Sarah Nam were just two of many Harvard undergraduates, graduate students, and faculty members who took full advantage of the first winter break since the University moved to a new, unified calendar this academic year. For undergraduates, the change meant that exams occurred in December prior to the break between Christmas and New Year’s Day for the first time. The calendar shift freed up several weeks in January that had previously been occupied with the fall reading period and final exams.

The change was recommended by the 2004 Report of the Harvard University Committee on Calendar Reform, which suggested that all of Harvard’s Schools adopt the same academic calendar to facilitate cross-School collaboration. Specifically, the committee recommended beginning the school year in early September, concluding fall exams in December before the break, moving Commencement from early June to late May, and coordinating Thanksgiving and spring break across the Schools.

Among the activities undertaken by students and faculty members over winter break were the service trip to Uganda, a journey to El Salvador to promote literacy by students at Harvard’s Graduate School of Education (HGSE), a water purification project in the Dominican Republic that became an exercise in earthquake relief for neighboring Haiti, and a journey to India by the women’s squash team to play demonstration matches and engage in several days of squash instruction and academic tutoring for poor children in the northern India city of Chandigarh.

Liao, Nam, and fellow undergraduate Katherine Lim traveled to Uganda on New Year’s Day guided by Keri Cohn, a clinical fellow in pediatrics at Harvard-affiliated Children’s Hospital Boston. The four traveled to Nyakibale Hospital in Uganda’s Rukungiri District as part of the Initiative to End Child Malnutrition, a collaboration between Nyakibale Hospital; the Harvard College Global Hunger Initiative (a student group founded by Nam and others); and Massachusetts General Hospital’s Division of Global Health and Human Rights, whose Initiative for Emergency Care in Rural Uganda already operates at Nyakibale Hospital.

For several months before the trip, students worked with Cohn to translate World Health Organization malnutrition protocols into workshops for local nurses, doctors, and other health care providers and hospital administrators. During their three weeks at Nyakibale, the students presented dozens of sessions of the nine-part course to nurses there. Cohn conducted similar workshops for physicians and hospital administrators. The course was designed to improve recognition of malnutrition, as well as to suggest ways to combat it.

Promoting literacy for all

A group of HGSE students from the international education policy program spent a week in El Salvador in a varied project that started with literacy and moved on to the arts.

The seven students were from the student group Learning Through Libraries, founded this year by Jill Carlson and Eleanor O’Donnell. Carlson and O’Donnell came up with the idea for the project and approached fellow student Debra Gittler, who had worked extensively in El Salvador to improve teacher training. Gittler embraced the project.

Aided by Gittler’s contacts, the group raised money to purchase 1,500 books and then networked with several organizations, including TACA Airlines — which agreed to ship the books — the Salvadoran nonprofit organization FEPADE, the Escuela de Comunicación Monica Herrera, the national art museum Marte, the Amigos School in Cambridge, and three schools in the town of Caluco.

The group wanted to do more than just ship books, so it arranged workshops on how to use and run a library and brought in local storytellers to work with children and grandparents to uncover local history and paint murals about it.

“We see it as facilitating the process of transferring from the grandparents to the students,” Gittler said.

HGSE student Briget Ganske also worked with students from the Escuela de Comunicación Monica Herrera in El Salvador to teach children at the three Caluco schools how to operate digital cameras. They then sent the children home to document their lives. The students’ photos will be on simultaneous display at HGSE and in El Salvador in February.

Gittler said the HGSE students hope to make Learning Through Libraries a permanent organization before they graduate in May, so that future HGSE students can participate in similar experiences.

The Harvard Women’s Squash Team spent 11 days in India. The training and service trip was led by the team’s coaches, including head coach Satinder Bajwa, who grew up in India and who runs a nonprofit organization dedicated to sports and academics for underprivileged children. Bajwa said he had the idea for the trip for some time, but it wasn’t possible until the calendar change freed up time.

“The idea has always been there, but the school calendar never allowed us to make it happen,” Bajwa said. “This is the first year, with the January window.”

Bajwa said the trip was planned to include rewarding personal activities as well as training that can help the team during the remainder of their season, which ends in March. During their stay, the group trained and played several local teams, including club teams and the Indian National Team, according to freshman Vidya Rajan.

“We lost,” Rajan said of the match with the Indian National Team. “They were very good. It was great preparation for some of our upcoming matches.”

Rajan, whose family is from Chennai, India, grew up in the United States but has visited Chennai. She said she enjoyed seeing other parts of the country during the team’s four-city tour. The team spent three days at the end of the trip in Chandigarh, coaching underprivileged children in squash and providing academic tutoring.

“It was just so rewarding. I’d never really seen those kinds of living conditions up close and personal,” Rajan said. “It was eye-opening, to say the least.”