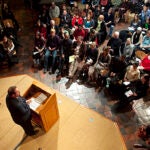 “Washington is Washington, and then there is the rest of the country, and there is a detachment that is hard to explain unless you have spent a fair amount of time in Washington.”

The assistant to the president for intergovernmental affairs and public engagement shared her insider’s perspective on Washington gridlock with a crowd at the Harvard Kennedy School (HKS) on Feb. 19.

Jarrett cited Republicans who refuse to engage, lobbyists who fight legislation such as financial regulation, and media that have helped to polarize the national dialogue as all playing roles in preventing critical reforms from moving forward.

Describing the everyday legislative process, such as that surrounding the health care debate, as “really, really ugly,” Jarrett compared the machinery of creating law to a sausage-making factory where the best intentions and the facts get “lost in the morass of Washington.”

“It’s been one year, and Rome wasn’t built in a day,” said Jarrett, addressing some of the president’s former supporters — and current critics — who expected quick and sweeping change. Obama’s commitment to a variety of reform efforts, she insisted, is as “vibrant today as it was one year ago.”

In the near future, Jarrett said, Obama plans to post online a version of a revised health care bill that would be “good for the American people,” in advance of a health care summit with recalcitrant Republicans later this month. She said he will respond to good counterproposals, and will continue to be “open for change.”

Christened “first friend” by David Gergen, himself a longtime presidential adviser who moderated the session at the John F. Kennedy Jr. Forum, Jarrett said she first met Obama and his future wife, Michelle Robinson, while working in Chicago government.

Jarrett said Michelle was an “extraordinary woman” whom she was eager to hire. Before Robinson said yes, recalled Jarrett, Robinson asked her to dinner to meet her fiancé, Barack, so the three could talk about the position.

That first encounter, said Jarrett, gave her an early look at the character of the future president and some of the qualities that he carried with him into the Oval Office. “He was a very good listener,” said Jarrett, and, despite asking “inquisitive questions,” made her feel instantly at ease.

Jarrett went on to serve as co-chair of the Obama-Biden presidential transition and as senior adviser to Obama’s presidential campaign.

Jarrett lauded Obama’s even temperament as president, as well as his disciplined thought process, his sense of empathy, and his ability to bring together groups of people with various opinions and “make everyone feel very comfortable opening up.”

Asked by Gergen, HKS professor of public service and director of the School’s Center for Public Leadership, how she is most helpful to the president, Jarrett said that comes in her ability to be blunt with the nation’s commander in chief.

“The higher I think you go, the harder it is to find people who will actually tell you the truth, particularly when they disagree with you,” she said, adding, “I feel very free to tell him when I completely disagree with him — respectfully, of course.”

Encouraging members of the next generation to consider pursuing careers in public service, Jarrett urged them to follow their passions.

“Don’t be afraid,” she said, “to take a leap of faith and try something that’s a little bit outside of your comfort zone.”

The event was co-sponsored by the Center for Public Leadership.