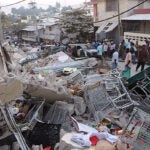 Students and faculty examine crisis prevention in Acting in Time

Why do societies and their governments fail so often to act in time to avert crises that appear in plain sight? What can be done to alter that pattern?

Those questions served as impetus for a new intensive January session course, “Acting in Time,” at the Harvard Kennedy School (HKS).  The course is one component of the Acting in Time initiative, launched in 2006 involving scholars, and now students, of various disciplines from across the University.  The course and initiative seek to leverage scenario planning and research to anticipate crises and prevent failures of public policy.

“On subjects as diverse as climate change, nuclear proliferation, global pandemics, and genocide, the same pattern recurs,” said HKS Dean David T. Ellwood, who co-taught the course with Christopher Stone, Daniel and Florence Guggenheim Professor of the Practice of Criminal Justice, and director of the Hauser Center for Nonprofit Organizations and the Program in Criminal Justice Policy and Management.

“Governments can see a crisis coming and the appropriate responses are often relatively well understood,” added Ellwood, who is also the Scott M. Black Professor of Political Economy. “The costs of acting now appear substantially less than the costs of acting later, when the crisis has already hit. Yet governments and people don’t always act at the right moment.”

The goals of the course, which ran Jan. 8-15, and the larger Acting in Time initiative are to understand the nature of these large-scale problems; to analyze the obstacles that prevent societies and their governments from acting; and to devise solutions that allow governments and citizens to act more effectively in specific instances. Even more important, it helps them to know how to organize themselves to act in time across the whole class of these problems.

By their nature, the problems and potential solutions are interdisciplinary.  The new January intersession provided a unique opportunity for collaboration among faculty from across the Harvard community to implement this course and to delve deeply into the issues, along with students from Tufts University and the Massachusetts Institute of Technology.

So why is it that despite advance knowledge of pending crises that people don’t act?  What are the biggest impediments to addressing issues such as genocide, climate change, and pandemics?  Course discussions suggested a variety of reasons, including a lack of political will, uncertainty about the issues, and in particular a lack of urgency around issues like climate change that will have longer-term impacts; the “noise problem” that comes when there are so many issues that it becomes difficult to decide what is important; and “collective action problems,” whereby no one wants to share the cost when everyone shares the benefit.

For example, in one session with guest speaker Kenneth Hill, professor of the practice of global health, Harvard School of Public Health, and adjunct professor of public policy, Harvard Kennedy School, students examined the issue of demography.  They discussed how the decrease, increase, or leveling off of fertility rates in countries may affect the overall population, and the inherent challenges to society that ensue. Demographic shifts may appear to be slower to affect societies, with changes seen over generations, and they may not appear to have the same obvious negative ramifications as issues such as genocide and pandemics.

However, as demographics shift and populations increase or decrease as a result of fertility rates, there is likely to be a rapid shift in the nature of the workforce, with corresponding effects on who will receive pensions, Social Security, and other services needed by an aging population.  As Ellwood said, “It’s a very interesting and provocative future.”