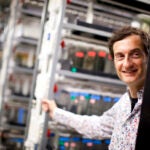 Some mouse sperm can discriminate between their brethren and the competing sperm from other males, clustering with the closest relatives to swim faster in the race to fertilize an egg. But this sort of cooperation appears to be present only in some promiscuous species, where it affords an individual’s sperm a competitive advantage over that of other males.

The work is described this week (released Jan. 20) in the journal Nature by biologists Heidi S. Fisher and Hopi E. Hoekstra of Harvard University.

“The race among sperm toward the egg is fierce, but never more so than when sperm of different males compete,” said Fisher, a postdoctoral researcher in Harvard’s Department of Organismic and Evolutionary Biology. “In some species where females mate with multiple males, groups of sperm join forces to outswim their uncooperative competitors. We’ve shown that, in deer mice, cooperation only occurs among close relatives — sperm from the same male.”

This ability of sperm to discriminate between related and unrelated sperm is not seen in monogamous species, in which sperm of different males are unlikely ever to interact. The results suggest that competition among males drives cooperative behavior among their sperm.

Fisher and Hoekstra studied sperm from two species of deer mice, Peromyscus polionotus and Peromyscus maniculatus. Although closely related, the species differ greatly in their sexual behavior: P. polionotus is monogamous, while P. maniculatus females are promiscuous, mating with successive males as little as one minute apart.

The scientists found that only sperm from the promiscuous species showed the ability to discriminate between closely related and more distantly related sperm. When sperm from different P. polionotus males was combined in a Petri dish, it showed no selective aggregation.

“This finding that sperm can discriminate suggests that sperm may be much more complex than we’ve appreciated,” said Hoekstra, John L. Loeb Associate Professor of the Natural Sciences at Harvard. “Because more than 95 percent of mammals are promiscuous, it’s possible this ability to discriminate and cooperate may be fairly widespread.”

Fisher and Hoekstra say it’s not yet clear exactly how sperm identifies its relatives. Previous research by a different group at Harvard suggested that a single gene allows cooperative yeast to recognize related individuals. Fisher and Hoekstra found that one mouse’s sperm can even discriminate against that of its brother, suggesting that the recognition system must be very fine-tuned.

“Whatever the recognition factor is, it would have to be highly variable,” Fisher said. “It may involve a hypervariable protein expressed on the outside of the sperm head.”

The current work builds upon research published in 2002 by Harry Moore and colleagues at the University of Sheffield. Moore found that sperm from wood mice could clump together to increase swimming velocity during their migration toward the egg, but did not identify kinship as the factor determining which spermatozoa join forces.

“Since all but one sperm fail to fertilize after joining a group, this altruistic behavior has been assumed, but never demonstrated, to occur only between closely related sperm,” Hoekstra said. “Our results show that the temporary alliances among sperm are not passively formed. Rather, they represent a complex discriminatory behavior driven by sexual selection.”

Moore also investigated whether human sperm clusters in the same way, finding little evidence that it does.

“Most rodent sperm have hooked heads, enabling mouse sperm to cluster together,” Fisher said. “In humans, the sperm head is rounder, which does not facilitate clustering.”

Fisher and Hoekstra’s work was funded by the National Institutes of Health and the Arnold and Mabel Beckman Foundation.