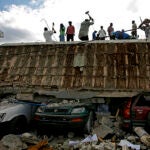 A week after an earthquake devastated Haiti, Harvard University affiliates have ramped up a combined medical and surgical aid effort in the battered island nation that is larger than that of any nongovernmental organization.

The logistics required to coordinate medical assistance that broadly and quickly is likely to provide a helpful template in the future for harnessing the power of academic medicine to meet the demands of major disasters, officials believe.

Fifty medical and surgical personnel have been deployed in Haiti in the last week from Harvard-affiliated hospitals. Harvard teaching hospitals have sent planeloads of medical supplies, including surgical and anesthesia equipment. More surgical teams are lined up to depart for Haiti Wednesday (Jan. 20).

Partners In Health (PIH), a not-for-profit Harvard affiliate, has taken the lead in University-related medical aid. The group, co-founded by Paul Farmer, the Maude and Lillian Presley Professor of Social Medicine at Harvard Medical School, operates nine medical sites in Haiti and has had a presence there since 1985.

PIH has seven operating rooms at the University Hospital in Port-au-Prince, where 1,000 patients await surgery. The agency has been shuttling patients to other medical facilities in the rugged Central Plateau, two hours away, and has just opened a treatment center outside Port-au-Prince, the Haitian capital, with three more operating rooms.

For the next week or two, “surgical needs will dominate,” said HHI’s co-director Michael J. VanRooyen, who is helping to coordinate Harvard’s medical resources bound for Haiti.

Amputations and wound debridements are common, and crush injuries and infections are a major cause of mortality.

Among the Harvard affiliates helping to send medical and surgical teams are Brigham and Women’s Hospital, Children’s Hospital Boston, and Massachusetts General Hospital.

After the initial response, VanRooyen said, the challenge will be to create temporary housing for the displaced, nurse the injured, and provide post-operative care.

Large numbers of those who were displaced in Port-au-Prince, he said, “are living in the rubble.”

The Haitian carnage is different from most earthquake disasters, said VanRooyen. It happened in a large city, where crushing injuries are a huge factor, but where surgical facilities are close by.

Harvard’s medical authorities on the ground have begun to get word out on the conditions they have found in Haiti, despite spotty cell phone service and limited access to e-mail. Some physicians already have rotated through the country.

Stephanie Rosborough, an emergency physician and disaster relief expert at Brigham and Women’s, was in Miami today (Jan. 19) after five days at a U.N. compound medical clinic in Port-au-Prince. Later today, she will be on a plane to the Dominican Republic, and will travel overland to Jimaní, a town on Haiti’s eastern border. There, Rosborough will help set up a post-operative medical camp.

She had arrived in Port-au-Prince last Thursday (Jan. 14) from Santo Domingo by helicopter, a vantage that revealed the enormity of the destruction in the capital, where structures collapsed “like stacks of pancakes.” In the city, water was scarce even for doctors and other medical staff, said Rosborough. Everyone slept in or outside the same two vast plastic tents housing 150 patients at the U.N. compound.

One day, she said, doctors performed 14 amputations using ketamine, a common drug for field surgeries, to anesthetize the patients. Crushing injuries, broken bones, and infections — even gangrene — were common, said Rosborough, a Cambridge resident who is director of the International Emergency Medicine Fellowship at the Brigham.

Many Haitians “have lost everything they have,” she said, and now many face life without limbs, or without family. “It’s heartbreaking.”

Evan Lyon, a resident in internal medicine at the Brigham, spent his first 12 hours in the capital city last weekend assessing the need for emergency medical care.

“Beyond the horror,” he wrote of his drive through Port-au-Prince Sunday, “one striking reality is that things are totally peaceful. We circulated …  in the middle of everything until just now. Everywhere. No U.N. No police. No U.S. Marines and no violence or chaos or anything. Just people helping each other.”

Lyon, once a teacher in Port-au-Prince, split his time for the last year between Boston and Haiti’s Central Plateau, where PIH has eight community-run clinics collectively called Zanmi Lasante.

Jonathan Crocker, an internist at Beth Israel Deaconess Medical Center in Boston, another Harvard affiliate, arrived at Zanmi Lasante’s flagship clinic in Cange on Sunday, and posted his impressions the next day.
“Patients are dazed,” he wrote of the growing flood of wounded arriving from the capital. “The disruption to their families and lives is beyond description. Many of our injured patients are not mobile, have few resources, have no home to return to, and many have lost their entire families. We care for their wounds. We listen. We grieve with them.”

“All Harvard hospitals continue to communicate closely with each other around
issues relating to supplies and material support for PIH and other efforts,” according to the HHI Web site. “The level of coordination is a strong testimony to the solidarity of the Harvard system in support of Haiti and our partnering organizations providing relief.”

PIH surgical teams are working in Cange as well as at the University Hospital in Port-au-Prince. PIH has become one of the largest medical and surgical nongovernmental organizations and one of the lead agencies for civilian humanitarian assistance in Haiti.

Security and safety remain key concerns, but so far Harvard-affiliated medical personnel in the field report that Port-au-Prince has been generally peaceful, that logistics are improving, and that health workers are safe and well.

As Lyon drove through Port-au-Prince in search of urgent emergency cases, he passed the city’s main central park, where almost 50,000 people were sleeping at night.

“It was almost silent,” he wrote. “People cooking, talking, some singing and crying.”

Despite hundreds of injured people lying on the ground, with “open fractures, massive injuries of all kinds,” he wrote, “people are kind, calm, generous to us and others.”

But the stench of death was everywhere, wrote Lyon. “The city is changed forever.”

Lyon oversaw the evacuation of four patients to U.S. hospitals, who may be the first Haitian nationals to leave for care in the United States, he said.

Crocker wrote that the Cange operation is “incredibly busy,” especially as the wounded have begun to develop complications, especially sepsis and venous blood clots from immobility and trauma.

“The Haitian medical staff of Partners In Health/Zanmi Lasante and survivors of the quake are working with unimaginable valor and dedication, as many of them have lost several or most members of their family,” he wrote. “And yet they remain here, working tirelessly to provide care for others. They are the true heroes.”