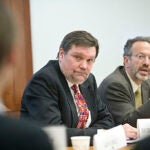 Harvard University will create a relief fund for faculty and staff who have been directly affected by the devastating earthquake in Haiti.

The University’s executive vice president, Katherine N. Lapp, announced the fund Friday (Jan. 15), broadening Harvard’s on-campus response to the crisis in the beleaguered Caribbean nation. Members of the Harvard community will be encouraged to contribute to the fund, and any employee struggling with a personal loss from the disaster can apply for financial assistance.

“We want to be sure that we are responding to this catastrophe on a personal level as well as at an institutional level,” Lapp said. “Many members of the Harvard community are coping with this tragedy, and we want to make sure that we are supportive of them.”

Details about eligibility and administration of the fund were being worked out by a Central Administration team.

In addition, Harvard College Dean Evelynn M. Hammonds posted a letter to students on the Faculty of Arts and Sciences Web site, expressing sadness for the people of Haiti, while acknowledging that undergraduates are eager to help.

But for the time being, she wrote, students are better off helping at home rather than heading for the Caribbean.

“The most effective thing that Harvard students can do in the immediate term is to support relief efforts through fundraising and other activities,” said Hammonds, who is also the Barbara Gutmann Rosenkrantz Professor of the History of Science and of African and African American Studies.

In the letter, she mentioned three ways that students can help: Harvard’s Office for the Arts, which is exploring the idea of a benefit event or concert; the Phillips Brooks House Association, which will help to coordinate public service aid for Boston-area Haitian communities; and Harvard’s dedicated Web site for Haitian financial help.

The situation in Haiti remains dire, said Arrietta Chakos, director of the Acting in Time Advance Recovery Project at the Harvard Kennedy School.

In an e-mail Friday, she outlined the first priorities for a ravaged Haiti: water, communications, fuel, and power. All are lifelines that must be in place for relief operations to work in the crucial next several days.

“The humanitarian response now has to be swift, decisive, and coordinated,” wrote Chakos. “The incoming responders must be self-sufficient, collaborative, and focused on immediate need because the Haitian authorities are not yet able to manage the situation.”

She called the aftermath of the 7.0-magnitude earthquake a “landscape-scale” disaster that only magnified Haiti’s “pre-event systemic vulnerabilities.”

Haiti is one of the poorest nations in the world. Even before the quake, few homes had reliable power, sewage disposal, or safe drinking water.

After water, fuel, and other basics, other needs “must follow close on,” said Chakos, including medical services, emergency housing, and a continuity of Haitian governance.

In the long term, “strengthening the social connections among people is crucial to rebuilding hope and purpose,” said Chakos.  “The disaster literature shows that typically 10 years is the period for a region to recover from catastrophe. Haiti will likely follow this trajectory.”

Longer-term recovery “will emerge with support from responding nations,” she said, “in the form of governance guidelines, social institution building, and development of safe building practices.”

Meanwhile, a common Haitian phrase tells the story:  “kenbe fem,” which means “hold on” – as in, “Keep the faith, don’t despair, help is on the way.”

Help has raced toward earthquake-shaken Haiti from many nations this week, as well as from groups of experts and medical personnel affiliated with Harvard University, which has several institutional ties to the country. A 7.0-magnitude earthquake struck the island nation Tuesday (Jan. 12), radiating shock waves from an epicenter 10 miles southwest of Haiti’s crowded capital of Port-au-Prince.

Harvard President Drew Faust announced today (Jan. 14) a dedicated Web page to make it easier for members of the Harvard community to respond to the crisis.

“Scenes of such suffering remind us of our own humanity, and our natural reflex is to reach out to help,” she said. “The destruction in Haiti has shocked and saddened us all. Our thoughts and prayers are with the Haitian people, the men and women who are working to help them recover from the earthquake that has devastated their nation, and the members of the Harvard community who are anxious for word from friends and loved ones living on the island.”

Assistance was en route in other ways as well.

Massachusetts General Hospital has deployed the International Medical Surgical Response Team (IMSuRT). It will go to Haiti within days.

The Harvard Humanitarian Initiative (HHI) is coordinating a roster of medical, surgical, and public health personnel within the Partners HealthCare System who are available for deployment to Haiti.  (Interested volunteers can contact Brian Daly at bdaly1@partners.org.)

Harvard’s Joia Mukherjee left for Haiti Wednesday (Jan. 13). She is chief medical officer of the Harvard-affiliated Partners In Health (PIH), a not-for-profit aid group with community-based clinics in Haiti and eight other countries.

Going to Haiti also is David Walton, an internist at Brigham and Women’s Hospital in Boston who is associated with PIH and is an instructor in medicine at Harvard Medical School. In 2008, he helped to set up a 54-bed hospital in La Colline in Haiti’s rugged Central Plateau.

Mukherjee and Walton are the vanguard of Harvard-affiliated assistance. Their reports will help focus future relief efforts in the form of supplies and personnel.

Ivers is clinical director in Haiti for PIH, which opened its first clinic in rural Haiti in 1985 and has since opened eight more that are run by PIH’s sister organization Zanmi Lasante, which means “Partners In Health” in Haitian Creole.

PIH also has community-based medical operations in Peru, Russia, Lesotho, Malawi, Rwanda, Mexico, Guatemala, and the United States. The clinics are staffed by local medical personnel as well as by Harvard faculty and students.

The group’s main hospital is L’Hôpital Bon Sauveur in Cange, about 20 rugged miles outside Port-au-Prince. It “experienced a strong shock” from the quake, according to the PIH Web site, “but no major damage or injuries.”

Zanmi Lasante and its satellite clinics already can call on more than 120 doctors and nearly 500 nurses, impressive numbers that are being used to leverage efficient and rapid medical relief for what already was the Western Hemisphere’s poorest nation.

PIH issued a call yesterday for more experienced medical personnel to help in Haiti, especially surgeons who specialize in trauma and orthopedics. Also needed are emergency room doctors and nurses, and full surgical teams, including anesthesiologists, scrub and post-op nurses, and nurse anesthetists.

PIH is employing a two-part strategy to speed medical care to devastated Port-au-Prince, where thousands are believed dead and thousands more hurt. Field hospital sites in the capital city, linked to a supply chain from the Dominican Republic, which shares the island with Haiti, are being used for triage and immediate care. PIH sites in the Central Plateau — two hours from the wrecked capital of 2 million people — are being readied to serve a flow of patients from the capital.

A church in Cange has been converted into a large triage site. There and in Hinche, another PIH medical location, a “steady flow” of injured people from the capital are receiving medical care.

In the capital alone, “tens of thousands” will need medical care, according to the PIH Web site, a situation that makes financial assistance a high priority as well.

“Haiti is facing a crisis worse than it has seen in years, and it is a country that has faced years of crisis, both natural disaster and otherwise,” according to a post earlier this week by PIH executive director Ophelia Dahl. “The country is in need of millions of dollars right now to meet the needs of the communities hardest hit by the earthquake.”

Jeffrey S. Flier, dean of the Faculty of Medicine at HMS, said that all faculty and students involved with PIH in Haiti are reported safe. But the situation on the ground in Haiti is an “overwhelming tragedy,” he said. ????We all share in the shock and grief over yesterday’s devastating earthquake in Port-au-Prince. Our hearts go out to the millions who have been affected, both in Haiti and closer to home.”

Flier also expressed concern that some members of the Harvard community “may be experiencing personal losses, and we want to offer them our compassion and to provide them with the support they may need.” Members of the Harvard community who would like counseling services or referrals are asked to call Harvard’s Employee Assistance Program at 877.327.4278 or to contact their Human Resources representatives.

Other Harvard-related relief efforts are also rolling out. The HHI, a University group of disaster-relief specialists, is working with nongovernmental organizations to assess immediate medical needs and other required assistance, according to spokesman Vincenzo Bollettino. HHI will offer regular updates on its Web site and on Twitter concerning Harvard’s relief partners and affiliated programs and hospitals, he said.

Brigham and Women’s Hospital has dispatched an emergency response team, including HHI’s director of education, Hilarie Cranmer, who is a physician and clinical instructor. The team will work with United Nations and Dominican officials to address the immediate needs of displaced people.

HHI fellow and physician Miriam Aschkenasy, a public health specialist at Oxfam America, is also working on Haitian relief. HHI is in touch with Alejandro Baez, a physician and former faculty member at Brigham and Women’s who now runs disaster services in the nearby Dominican Republic. They will assess the needs for further disaster response.

Zanmi Lasante is one of the largest nongovernmental health care providers in Haiti and the only provider of comprehensive primary care.

It has a 104-bed hospital with two operating rooms, adult and pediatric inpatient wards, an infectious-disease center, an outpatient clinic, a women’s health clinic, ophthalmology and general medicine clinics, a laboratory, a pharmaceutical warehouse, a Red Cross blood bank, radiographic services, and a dozen schools.