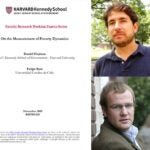 A new system for measuring poverty

A catastrophic earthquake in Haiti Tuesday (Jan. 12) sent tremors all the way to Boston, prompting rapid, broad-based medical and humanitarian assistance from Harvard University and its affiliates.

Two faculty members from Harvard Medical School (HMS) are traveling today (Jan. 13) to Haiti, where they will join others already engaged in rescue operations, medical care, and relief efforts.

En route is Joia Mukherjee, medical director of Harvard-affiliated Partners In Health (PIH), a not-for-profit aid group with community-based clinics in Haiti and eight other countries.

Also on the way is David Walton, an internist at Brigham and Women’s Hospital in Boston who is associated with PIH and is an instructor in medicine at HMS. In 2008, he helped to set up a 54-bed hospital in La Colline in Haiti’s rugged Central Plateau.

Mukherjee and Walton will help medical and aid efforts in the shattered Caribbean island nation. Once they report back, PIH will send the appropriate supplies and personnel to provide relief.

Ivers is clinical director in Haiti for PIH, which opened its first clinic in rural Haiti in 1985 and has since opened eight others. PIH also has community-based medical operations in Peru, Russia, Lesotho, Malawi, Rwanda, Mexico, Guatemala, and the United States. The clinics are staffed by local medical personnel as well as by Harvard faculty and students.

All faculty and students involved with PIH in Haiti are reported safe, said Jeffrey S. Flier, dean of the Faculty of Medicine at HMS.

Meanwhile, the situation on the ground in Haiti is an “overwhelming tragedy,” he said. “We all share in the shock and grief over [Tuesday’s] devastating earthquake in Port-au-Prince. Our hearts go out to the millions who have been affected, both in Haiti and closer to home.”

Flier also expressed concern that some members of the Harvard community “may be experiencing personal losses, and we want to offer them our compassion and to provide them with the support they may need.” Members of the Harvard community who would like counseling services or referrals are asked to call Harvard’s Employee Assistance Program at 877.327.4278 or to contact their Human Resources representatives.

Other Havard-related relief efforts are also rolling out. The Harvard Humanitarian Initiative (HHI), a University group of disaster-relief specialists, is working with nongovernmental organizations to assess immediate medical needs and other required assistance, according to spokesman Vincenzo Bollettino. HHI will offer regular updates on its Web site and on Twitter concerning Harvard’s relief partners and affiliated programs and hospitals, he said.

Brigham and Women’s Hospital has dispatched an emergency response team, including HHI’s director of education, Hilarie Cranmer, who is a physician and clinical instructor. The team will work with United Nations and Dominican officials to address the immediate needs of displaced people.

HHI fellow and physician Miriam Aschkenasy, a public health specialist at Oxfam America, is also working on Haitian relief. HHI is in touch with Alejandro Baez, a physician and former faculty member at Brigham and Women’s who now runs disaster services in the nearby Dominican Republic. They will assess the needs for further disaster response.

PIH’s main hospital, L’Hôpital Bon Sauveur, is in Cange, about 20 rugged miles outside Port-au-Prince. It experienced a strong shock from Tuesday’s powerful quake, but no major damage or injuries.

The hospital and its satellite clinics — already serving a flood of medical evacuees from the capital — are run by Zanmi Lasante, PIH’s sister organization, which means “Partners in Health” in Haitian Creole.

The earthquake, measured at 7.0 on the Richter scale, was centered 10 miles southwest of Port-au-Prince and has affected one in every three Haitians, about 3 million people. Many thousands of Haitians are believed dead.

“The earthquake has destroyed much of the already fragile and overburdened infrastructure in the most densely populated part of the country,” according to the PIH Web site. “A massive and immediate international response is needed to provide food, water, shelter, and medical supplies for tens of thousands of people.”

Communications throughout Haiti were disrupted. In theory, Zanmi Lasante has Internet access and cell phone communication via satellite.

HMS student Thierry Pauyo is working at Zanmi Lasante. But the Harvard School of Public Health does not have any students in Haiti on regular winter session travel courses, nor are there students registered who come from there. Harvard University does have a student from Haiti, said Sharon Ladd, director of the Harvard International Office. The student’s immediate family is reported safe.

Zanmi Lasante means “Partners In Health” in Haitian Kreyol (Creole). Its main site — now a vital center of stability in a devastated land — is one of the largest nongovernmental health care providers in Haiti and the only provider of comprehensive primary care.

It has a 104-bed hospital with two operating rooms, adult and pediatric inpatient wards, an infectious-disease center, an outpatient clinic, a women’s health clinic, ophthalmology and general medicine clinics, a laboratory, a pharmaceutical warehouse, a Red Cross blood bank, radiographic services, and a dozen schools.