Freshman at State of Union 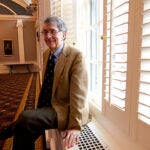 Harvard freshman Janell Holloway of Matthews House was among the select few invited to Wednesday’s (Jan. 27) State of the Union speech. Holloway, a Washington, D.C., resident who was an intern last summer in the D.C. Scholars program, watched the speech from first lady Michelle Obama’s box.

The Harvard Gazette asked Holloway about her experience. Below is an edited version of that conversation:

Q. When did you get invited to sit with the first lady, and how did that come about?

A. About a week ago. My old boss called me and asked, “Janell, what are you doing next Wednesday?” I said, “I’m going back to school because the first day of class was Monday.” She said, “Well the first lady has invited you to sit in her box for the State of the Union address. Can you get a flight back here?” Immediately after that, I called my parents. They booked me a flight, and everything just sort of happened really fast after that.

Q. Did you fly down just for the day, and were there other events involved?

A. I flew down Tuesday night right after my classes. [On Wednesday,] two hours before we had to go to White House, we went to the U.S. Department of Education and met [Secretary of Education] Arne Duncan.

Q. You went to the White House and then the Capitol?

A. We went to the White House first. We had a little reception, and we got to bring one guest. I brought my dad, Jim Holloway. [There were] mostly staffers there, and then the first lady came just before she had to get ready to go. She came by to say hello and thanked us and kind of told us what to expect.

Q. How was the speech itself?

A. The speech was cool. It was kind of funny because whenever he said something really important, they started clapping. Sometimes they clapped so loud you couldn’t hear everything he said. It was interesting to see how they interacted. He threw in a few ad libs and some little jokes, and that was cool too. It was never a dull moment. It was a great speech. It was really amazing.

Q. Did you interact with other people in the box?

A. On the van ride over there, we talked to a lot of the people going into the box. Everybody was there for a different reason. The mayor of Oklahoma City was there. There were a few military personnel there. It was pretty interesting. Once we were in the box, while members of House were talking on the floor, we were talking. Even during the speech, when he made interesting points, you heard a few people making comments.

Q. Did you get to interact at all with the first lady during the speech?

Q. How would you describe her?

A. She’s actually really tall. I didn’t realize she was so tall. She’s very personable, very nice. She seems really down to earth. She’s really funny. What you see on TV isn’t fake.

Q. Do you know what you’re going to study here at Harvard?

A. I’m thinking of science, but haven’t made a decision yet.

Q. Has this experience made an impact on you?

A. When I first received the call, I was really excited but … it wasn’t until I talked to my parents and saw how they reacted that I realized how big a deal this is. Actually being in the room and seeing how people interacted with each other and the way he [Obama] presented himself and made his points was a really big deal. And being part of history, that had a big impact on me. I think meeting them, seeing how down to earth they are, how calm he is, how honorable, how accessible, despite the criticism he gets, I think is very inspirational. It was a totally amazing experience.

Q. Did you come up to Cambridge this morning?