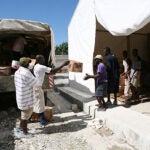 How two mayors broke the mold to rejuvenate their cities

The Harvard Kennedy School hosted two iconoclastic mayors on Monday (Jan. 25), both of whom entered government in their countries as a second career and changed their cities by shaking up politics as usual.

The discussion involved the visionary urban landscapes of Edi Rama, a former artist and mayor of Tirana, Albania, and Antanas Mockus, once an academic and a former mayor of Bogotá, Colombia. Addressing an overflow audience, the former mayors outlined the offbeat methods by which they helped to transform their cities, in a discussion titled “Dialogue in Cultural Diplomacy and Urban Transformation.”

“We see ourselves as moral subjects, but others as legal subjects. We obey for positive reasons, but we think others obey for negative reasons,” Mockus said.

As mayor from 2001 to 2003, Mockus used humor, peer pressure, and visual reinforcements as tools of cultural persuasion in Bogotá, a period in which the homicide rate fell by 70 percent, traffic fatalities dropped by half, water conservation increased, and drinking water and sewer service reached nearly all homes for the first time in the city’s history. He prompted 60,000 people to pay an extra 10 percent in taxes — voluntarily.

How did he help to foster those changes? By handing out thousands of thumbs-up and thumbs-down cards to citizens who used them as a peaceful way to judge one another’s behaviors in the public sphere, by hiring mimes to make fun of traffic violators, and by placing yellow stars at all the locations in which there had been a pedestrian death in the previous five years, just to name a few. The approach worked, he said, because it combined three regulatory systems: law, morality, and culture.

Rama’s approach was quite different, but proved equally effective. As a former artist, he started with paint when he was elected in 2000 “with a landslide but no budget” to head the capital city of Albania, a country with a troubled history that came under communist rule in 1946. In 1992, communism fell and ushered in an era that shifted rapidly from collectivism to “total individualism.” Problems exponentially increased as Albanians from the countryside flocked to Tirana in search of jobs, increasing the city’s population nearly threefold in just two decades.

Using money from the World Bank, the European Union, and other international organizations, Rama razed many of Tirana’s often illegal, generally derelict buildings and transformed others by having bold colors and abstract patterns painted on their facades. He cleaned up the piazzas, introduced green space, improved infrastructure, and literally brought light to a city that, when he took over, had only 78 working streetlamps. “This basically permitted us to regain the spirit of citizenship,” Rama said. “So, from a no man’s land, we now have a city with problems.”

Both men admitted that their ideas have not solved all of their cities’ challenges and that they were initially greeted with skepticism. “People were [saying] that the mayor is a clown,” said Mockus. “I remember a lot of taxi drivers saying, ‘I voted for you; we will see.’ And I remember saying, ‘Help. Don’t be a spectator.’”

Rama, who, in addition to being mayor is also the leader of Albania’s opposition Socialist party, had a similar experience. “Of course they said I was crazy,” he said. But in the buildings that had been refreshed, the city suddenly attained a 100 percent tax-collection rate and saw crime plummet. “All from a simple gesture of painting a building,” Rama said.

“But the deeper [effect] was to give to people a sense of belonging and also pride in the city where they were living.” Well into the project, a survey of Tirana’s citizens found that although only 63 percent said they liked the painted buildings, 85 percent said they wanted the painting to continue. “So half of the people who didn’t like it wanted it to continue,” Rama said. “This told a lot about the energy that this was creating.”

The discussion was sponsored by the Kokkalis Program on Southeastern and East-Central Europe, and co-sponsored by the Cultural Agents Initiative and the Public Diplomacy Collaborative.