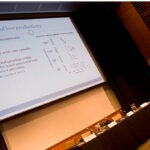 Although the exact function of sleep remains unknown, sleep is clearly necessary for optimal cognitive performance, learning, and memory. Sufficient sleep is also important for cardiovascular, metabolic, and immune functions. New findings by Harvard researchers at Brigham and Women’s Hospital (BWH) show how as little as one night’s sleep loss – or sleep loss over several weeks – combine with the body’s
natural 24-hour rhythms to determine how well people perform at a given moment.

The researchers found that
chronic sleep loss over three weeks caused performance to deteriorate at a
faster rate for each consecutive hour spent awake, particularly during natural
low-performance periods late at night. When individuals with a history of
chronic sleep loss attempt to work extended hours into the night, their
reactions become about 10 times slower, increasing the risk of accidents and
errors. These new findings appear in today’s edition of Science Translational
Medicine.

The natural, or circadian, rhythms and sleep-wake cycles are normally
intertwined, so special study conditions are required to tease apart these
influences on how well people function without sleep. The researchers scheduled
nine healthy volunteers to live for three weeks on a schedule consisting of 43-hour
“days,” each with 33 hours of scheduled wakefulness and 10 hours of scheduled
sleep. This equates to 5.6-hour sleep opportunities every 24 hours. Researchers
were able to assess the effects of acute sleep loss from long consecutive hours
awake, chronic sleep loss from reduced overall sleep over weeks, and the
independent cycling of the circadian rhythm.

The researchers found that:

“Many people have a false sense of reassurance that they can quickly recover
from a chronic sleep debt with just one or two days of good sleep,” said Harvard Medical School (HMS) clinical fellow in neurology Daniel
Cohen, lead author of the paper and a researcher in the Division of Sleep
Medicine at BWH. “Our work may help explain this: One long night of sleep can restore
performance to normal levels for about six hours after waking, and the late
afternoon and early evening alerting signal of the circadian rhythm can largely
hide the effects of chronic sleep loss during the rest of a normal day. However,
the lingering effect of chronic sleep loss causes performance to deteriorate
dramatically when these individuals stay awake for an extended period of time,
for example when they try to pull an all-nighter.”

“Individuals who get too little sleep during the work or school week but try to
catch up on weekends may not realize that they are accumulating a chronic sleep
debt,” said Elizabeth Klerman, senior author of the paper and an HMS associate professor
in the Division of Sleep Medicine at BWH. “This may lead to a dangerous
situation in which individuals do not realize the extent of their sleep
deprivation and their vulnerability to sudden sleepiness when they try to drive
or work late into the night.”

“These findings contribute to the growing body of research showing that
resident physicians who are required to work in hospitals for 30-hour shifts
twice per week often make fatigue-related errors,” said Charles Czeisler, an HMS professor who heads
of the Division of Sleep Medicine at BWH and co-author of the paper. “Burning
the candle at both ends at the expense of sleep renders tasks such as driving a
truck, operating heavy machinery, or performing surgery dangerous, especially
during the hours ordinarily reserved for sleep.”

The research was supported by
the Air Force Office of Scientific Research, the National Institutes of Health,
and the National Space Biomedical Research Institute.