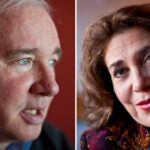 Haitian-born Vanessa Alix ’10 was visiting Dallas when the massive earthquake rumbled through her native land on Jan. 12. She saw a CNN news flash, but the vast scale of the disaster wasn’t immediately evident.

Once it was, Alix — a Mather House psychology concentrator — spent the night trying to get through, by cell phone and Skype, to Jacmel, a coastal town in southern Haiti where her parents run three linked school orphanages, for boys, girls, and toddlers.

Marlaine and Daniel Alix, Vanessa’s parents, made the same worried calls from their home in Port St. Lucie, Fla. (The family moved in 2001 after a kidnapping attempt, though the parents travel back and forth often.) The family, which has long been involved in Haitian assistance, opened its first school there in 1989, created the Faith & Love in Action Foundation in 1996, and founded Aid International in 2000.

“There was a lot of panic, a lot of fear,” said Alix of those first fearful hours, when they didn’t know how bad conditions were.

Finally the callers got through. All 72 orphans in Jacmel were safe. Still, the family runs another orphanage compound in Carrefour, the epicenter of the quake. There is no word from there yet. “We tried all the numbers we have,” said Alix.

The Faith & Love compound, three miles from Jacmel’s center, was nearly untouched by the 7.0-magnitude quake. But the small city itself is another story.

Once gracious, safe, and historic, Jacmel was 90 percent destroyed, said Alix, who is in touch with an aunt there. Jacmel had been a sunny enclave redolent of colonial France, with stacked balconies, tile roofs, and turreted homes in pastel tones.

“You went there, and you could actually see what Haiti used to be like,” said Alix, who lived in Haiti for 12 years, and still summers at Jacmel, her mother’s hometown. Alix’s aunt said almost all is now in ruins.

“She said there is no Jacmel anymore.”

The orphans in Jacmel are mostly 7 to 9 years old, with the youngest 11 months and the oldest 25.

“The kids are there as long as they need to be,” said Alix, repeating a family rule. “We provide all their education, and all their needs, and they leave whenever they are ready to leave.”

Now, the number of orphans has grown since the earthquake, said Alix, and local residents — hungry and sleeping out under the stars —are showing up for food, water, and medical care.

Marlaine Alix is headed to Jacmel today (Jan. 22), hitching a ride on a Dominican navy gunboat on an aid trip arranged by Sebastian Velez, a Harvard doctoral student in biology who runs a nongovernmental organization in Pedernales, in the Dominican Republic just across Haiti’s eastern border.

With assistance from four Harvard undergraduates and using funds donated by the American Humanist Association, Velez earlier this week delivered the first outside aid to Jacmel, including food, water, medicine, and tools. Supplies for the Faith & Love compound were included.

Alix’s mother does not plan to remain in Jacmel, but will return when transportation is normalized. Meanwhile, her father is working in Florida to collect donations from area churches.

The orphanage’s immediate needs are basic, said Alix, involving food and tents. “The kids have been catching cold,” she said. Water is available, since every Faith & Love compound has its own well.

“The kids are fine,” said Alix, who has stayed in touch by cell phone and Skype. “They’re singing, and they’re praying.”

In other developments touching on Harvard and Haitian relief efforts:

■ Partners In Health (PIH) reported today (Jan. 22) that Wednesday’s strong aftershock temporarily shut down PIH operations at the general hospital in Port-au-Prince, the capital, as well as at several PIH medical sites outside it. But the 12 operating rooms are back up and running 24 hours a day. Across Haiti, the Harvard-affiliated PIH has 20 operating rooms. Its medical facilities are supported by 144 volunteers, who arrived by plane. They supplement the 4,500 PIH health care providers already in Haiti. Additional medical supplies are needed to save patients threatened by infections in wounds now nearly two weeks old. For the next six to eight weeks, PIH said, full medical teams will be needed to manage dressings, skin grafts, and other postoperative care.

■ S. Allen Counter, Harvard clinical professor of neurology and director of the Harvard Foundation, flew to Haiti by helicopter on Jan. 18 from Santo Domingo, accompanied by four doctors and two medical assistants. On the team were Harvard Medical School’s Bruce Price, Timothy Benson, and Michael Jenike. The group brought medical supplies and helped to deliver tents and water. The visitors flew back to Boston from Santo Domingo Jan. 20. “I will continue to travel to Haiti with more tents for the homeless,” said Counter.