A new system for measuring poverty 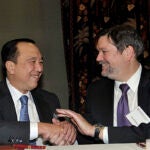 A new calculus developed at the Harvard Kennedy School provides a more precise method of comparing poverty levels and changes over time, and between countries. The method is outlined in a new Harvard Kennedy School working paper, “On the Measurement of Poverty Dynamics,” co-authored by Daniel A. Hojman and Felipe Kast.

Using commonly available poverty statistics, the authors established a framework for integrating metrics measuring the flow of people in and out of poverty with those who remain entrenched. In their analysis, the authors concluded that the “war on poverty” saw significant gains in the United States in the 1990s compared with the 1980s.

“Both decades exhibit similar inflows into poverty, but the 1990s have considerably more outflows,” the authors wrote. “This is in line with findings of the impact of welfare reform. Interestingly, a number of social mobility measures deliver the opposite ordering. If we hold the view that the conditions that shape the evolution of poverty were significantly improved by the reform … this suggests that our method provides a more accurate account of poverty dynamics than existing measures.”

Hojman and Kast also ranked both the United States and Germany behind the United Kingdom in aggregate poverty dynamics during the 1990s, although they ranked the United States first in terms of “social mobility,” the ability of those citizens in poverty to move themselves out of it.

“We view these axioms as a natural benchmark that allows for a parsimonious characterization of a ranking over distributions of streams of welfare attributes, and facilitates comparisons with those singled out by social mobility,” the authors concluded. “At the same time, principles that highlight other dimensions of income dynamics,” for instance “the income growth rate of poor individuals rather than changes in deprivation levels, can offer important insights. Analyzing the robustness of the rankings produced by our measures as we vary the underlying static deprivation scale also deserves more attention. Expanding the set of applications is an important step for future research.”