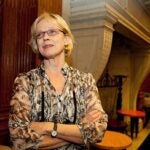 Magazine writer Maksim Maksimov, investigating police corruption, gets a tip. He follows an informant to an apartment on Furshtatskaya Street.

Five men are waiting there. Seizing Maksimov, they beat him, then choke him to death. They wrap his body in plastic, stuff it into the trunk of a car, and drive to a forest nearby. The body is never found.

Maria Yulikova, a freelance Russian journalist now studying at Tufts University, told the story of the 41-year-old Maksimov last month in a classroom at Harvard’s Memorial Hall. The setting was a freshman expository writing class taught by Jane Unrue.

Yulikova told the assembled students that she has the facts, and has talked to witnesses. But no one will go on record. One of the murderers is a high-ranking Russian federal police officer, she said. She asks them, as students of the persuasive essay, how she should get her message heard?

Unrue is an experimental-fiction writer with an M.F.A. from Brown University. In both sections of her class, Expository Writing 20: “The Voice of Authority,” she hosts two international writers every semester. They tell stories such as Yulikova’s, though more often through literary fiction — the kind of art that galls repressive governments.

Her literary visitors, all of whom she called “exceptional artists,” have included a Chinese dissident poet, an Iranian novelist unwelcome in his own country, a writer from Zimbabwe who is translating “King Lear” into his native Shona, a Buddhist story writer formerly jailed in Burma, and an Iraqi novelist whose painful reality sometimes emerges in the mask of science fiction. (One of her Saddam Hussein-era books speaks volumes with its title: “Things That Did Not Happen.”)

After the visits, Unrue’s students do a comparative literary analysis of the writers’ work, “often in light of the oppression they have endured,” she said.

Last spring, Unrue launched a Visiting Writers Series of public panels. Next spring’s panel will include participants from literary journals, most of which have been banned. The event will be partly funded by the Humanities Center at Harvard. Center Executive Director Steven Biel said of Unrue, “She does amazing stuff,” but future funding, he added, remains uncertain.

This year, Unrue also has put a name to the idea of hosting important literary artists from overseas: Writers at Risk. She hopes her new initiative will grow into a formal University shelter for important writers who face threats in their own countries.

Unrue’s idea has the support of the Harvard chapter of Scholars at Risk, which is part of an international network of institutions that provides refuge for 50 dissident academics a year. Most of them come from traditional disciples such as science and law.

Since 2002, Harvard has sponsored 20 scholars at risk; six are in residence this year. But only three of the 20 so far have been poets or novelists, said Unrue, who is on Harvard’s Scholars at Risk committee. The first, in 2007, was celebrated Iranian novelist Shahriar Mandanipour. The other two, in danger at home, remain anonymous.

Writers at Risk is a dynamic, though unofficial, component of Harvard’s Scholars at Risk chapter, said co-director Jacqueline Bhabha, who is also executive director of the Harvard University Committee on Human Rights Studies.

Bhabha, an authority on asylum law, is the Jeremiah Smith Jr. Lecturer in Law at Harvard Law School and a lecturer in public policy at the Harvard Kennedy School. Bringing such high-end writers to Harvard classrooms, she said, has been “spectacular.”

The presence of dissident and threatened writers enriches the classroom experience, and Writers at Risk could institutionalize that, said Unrue. “This is something we would like to build.”

Unrue also has a program that conducts audio interviews with dissident writers visiting from abroad. The interviews, two hours long, are historical but strongly literary, burrowing down into the level of technique, said Unrue. “They are really meant for the young writer.”

Yulikova’s visit was intended as a lesson in persuasive strategy for Unrue’s first class of 15 that day. Visits by any writers, she said, must have “a rigorous, practical nature.”

The students were seated around a large table under stained-glass windows. “We’ve been moving, from day one, to the real world,” said Unrue.

Her students had started the semester by reading “One Flew Over the Cuckoo’s Nest,” a 1962 novel by Ken Kesey. Now the real cuckoo’s nest was present, in the form of stories like Yulikova’s.

To the amazed freshmen, the Russian journalist opened a window into a world in which news writers, novelists, and poets are routinely murdered, imprisoned, or harassed for their work with words.

According to International PEN, the writers group, at least 68 online and print journalists have been killed in the last year, seven of them in Russia. Another 1,000 writers have been attacked, often by authorities; 200 of those assaulted were then sentenced to prison for 20 years or more.

Many such cases remain obscure, including Maksimov’s, said Yulikova, a master of arts in law and diplomacy candidate at the Fletcher School at Tufts.

“I feel like I’m the only journalist on the story,” she said, recalling her last interview in St. Petersburg, to which she brought a bodyguard. “It’s not big. It’s not a Moscow story.”

In the past five years, Yulikova has gleaned facts in the Maksimov case, in part as the one-time Moscow representative of the New York-based Committee to Protect Journalists.

But she has worked on the case as a friend too — a friend of Maksimov’s mother, who is still haunted to know the truth about her son’s death and yet remains helpless.

“I talk to her on the phone,” Yulikova told the class, as if to impart the writer’s real gift: empathy. “I hear her voice all the time.”