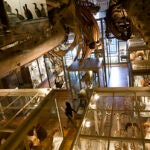 Forward into the past

A troubled snowboarder’s fateful twist on a Minnesota ski hill 13 years ago put him not only in the hospital, but also on a new life path that eventually led to laboratories at top research institutions. His resultant research led him to new insights into RNA’s role in the human body and the part it plays in disease when it goes awry.

John Rinn, an assistant professor of pathology at Harvard Medical School (HMS) and a researcher at Beth Israel Deaconess Medical Center (BIDMC) and the Broad Institute of Harvard and MIT, traces his scientific successes to an epiphany he had the summer after the snowboarding accident, while a University of Minnesota undergraduate.

As a torn knee slowly healed at his mother’s sweltering Georgia home, he read and reflected on opportunities missed and lessons learned during years spent doing little other than skateboarding in the summer and snowboarding in the winter.

His path since has included graduate study at Yale University, a postdoctoral fellowship at Stanford University, and his current work as a researcher. Over those years, Rinn discovered and is now investigating a new category of RNA. RNA is single-stranded genetic material once thought mainly to function as a biological tool to change DNA’s instructions into proteins. Research since the early 1990s, however, has revealed more types of RNA than previously known, with some playing key regulatory roles.

Rinn’s work revealed a new class of the molecule called “large intervening noncoding RNA,” or lincRNA, found in a part of the genome that science had previously thought to be filled with nonfunctional genetic junk.

Rinn’s 2003 discovery of lincRNA was met with scientific skepticism. That has slowly turned to acceptance as Rinn first identified a single lincRNA — which he called HOTAIR — and traced its function.

Rinn found that HOTAIR played a key role by delivering proteins to particular genes. He has since found many more lincRNAs that are involved with immune response, cancer growth, and fat and stem cell production.

“He’s onto something very big,” Saffitz said. “The guy has just come on so strong.”

Saffitz described Rinn as a creative and enthusiastic researcher who is laid-back and informal — until it comes to science.

When “you start talking about science, he’s quite focused, very intense, very creative,” Saffitz said. “He’s having a lot of fun. And in this field, if you’re not having fun you need to re-examine what you’re doing, because it’s really hard.”

Rinn’s work got him named to Popular Science magazine’s “Brilliant 10” list of the nation’s most-promising young researchers in October. Rinn was also named a National Institutes of Health New Innovator this fall, which came with $1.5 million to further his work.

Though he is focused now, few would describe a young John Rinn that way. He attended a succession of high schools and admits he put little effort into his schoolwork. Instead, he hung out with friends in downtown Minneapolis, riding skateboards and perfecting tricks. In winters, he and his friends left the city for local ski resorts.

After high school, Rinn enrolled in a community college and continued to put in little effort. He and his friends were seeing a bit of success on the slopes, though. They landed a local snowboarding sponsorship and talked about going to Denver to see if they could cut it on the big-time circuit.

But something inside told Rinn not to go. He had seen one friend paralyzed when a big jump went wrong, and another killed in a car crash while driving to the mountains. Though Rinn had embraced the teen skater culture, he sensed there was a time limit — like that on his teenage years themselves — on how long his body could take the punishment of a life pointed at skateboarding and snowboarding.

“I felt I needed to give something else a try,” Rinn said. “All I had was college. I had no idea how to approach it or get started.”

By the time of his snowboarding accident, Rinn had transferred to the University of Minnesota. After that summer of rehab, he took up running and considered a career as an exercise physiologist. He enrolled in science classes and found his passion, switching to chemistry and graduating with a bachelor of science in 1999.

Perhaps it was his anti-establishment youth that led Rinn to push on when some critics told him that his early lab results recorded just noise in the genome. Rinn admits to having something of a chip on his shoulder, to always feeling like he has to prove himself.

“A lot of people thought it was an artifact,” Rinn said. “We figured we’d give it a chance, give it a fair trial.”