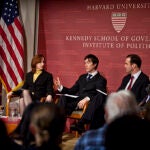 The University of Cambridge in England dates to 1209, which makes it one of the world’s oldest citadels of higher learning. Four hundred years later and 3,000 miles away, what would become the oldest college in the United States was named for its first benefactor, a Cambridge alumnus and minister who bequeathed his library and half of his estate to what is Harvard University.

The mother-and-child scenario is often used to describe the nature of the relationship between the two venerable institutions, with Cambridge as the parent, and Harvard as its ambitious offspring. Frequently, the affiliation is discussed with tongue in cheek.

Having fun with the relationship, Gordon Johnson, deputy vice chancellor of the University of Cambridge and president of Wolfson College, said, “Just like we talk about the ‘other English university,’ we would talk about Harvard as being our offspring that has sort of gotten out of hand … you are just so ruthless and successful.”

The familial bond has lasted four centuries and is now highlighted by an exchange of scholars and students and a shared commitment to education and research. This is the 800th anniversary of the birth of the University of Cambridge. To honor the occasion, the two institutions created a lecture exchange.

In October, the Rev. Peter J. Gomes, the Plummer Professor of Christian Morals and Pusey Minister in the Memorial Church, traveled to England, where he gave a talk on the historic link between the universities. The lecture took place at Emmanuel College, John Harvard’s alma mater and one of the 31 colleges in  the university. Gomes is an honorary fellow of the college, where the Gomes Lectureship has been created in his name.

In return, Johnson visited the Harvard campus (Dec. 3) to give a lecture titled “Universities and Society: Contemporary Cambridge and Harvard in Their Historical Contexts.” He spoke in the Pusey Room at the Memorial Church. The Office of the University Marshal and the Memorial Church sponsored the event.

Johnson, who joked that he was pleased to be part of the “revenge seminar,” expounded on the significance of universities in society, the need for them to actively engage the world beyond their walls, and the importance of seeking funding from a variety of sources.

“Successful institutions only survive as long as they do because they change and adapt,” said Johnson, who acknowledged that universities also have to struggle with an internal battle between being “excessively subversive and radical, and outrageously conservative.”

Universities such as Harvard and Cambridge, he said, also have a strong responsibility to the public good. Quoting Harvard’s Louis Menand, Anne T. and Robert M. Bass Professor of English, in Harvard Magazine, Johnson said, “It is the academic’s job in a free society to serve the public culture by asking questions the public doesn’t want to ask, investigating subjects it cannot or will not investigate, and accommodating voices it fails or refuses to accommodate.”

By those measures, Harvard and Cambridge, Johnson noted, have a special responsibility to use their resources well.

“They are rich, privileged, and blessed with a great tradition of learning, and that carries with it a responsibility to use those resources and people wisely, and in the best way.”

Johnson said universities should be positive, vigorous, confident, ruthless, and determined “to stay on top even if it means changing radically to do so. … These are the qualities that universities need in greater abundance if scholarship is not to ossify, and if higher education, through universities, [will] shape the future rather than simply react to it.”