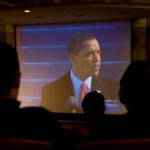 Analysts see some hope for success, but doubt U.S. can pull out easily

President Obama’s plan to boost the number of U.S. troops in Afghanistan to stabilize the country, which he hopes eventually will allow for a gradual pullback, is proving as controversial among foreign-policy authorities as it is among the American people.

Under the plan, the United States would dispatch 30,000 more troops to Afghanistan  and would target the Taliban, the mountainous nation’s resurgent former rulers, in an attempt to deny the terrorist group al-Qaeda a safe haven there. If stability could be achieved, Obama said he hoped to withdraw most U.S. troops within three years.

The panel included Meghan O’Sullivan, Rory Stewart, Brett McGurk, and Tad Oelstrom, and was moderated by Graham Allison, director of the Belfer Center for Science and International Affairs.

O’Sullivan, Jeanne Kirkpatrick Professor of International Affairs at the Harvard Kennedy School (HKS), was deputy national security adviser on Iraq and Afghanistan for President George W. Bush. She said she backed Obama’s strategy, but with  “considerable reservations,” especially because of the lack of focus on the effects it might have on Pakistan, Afghanistan’s troubled neighbor.

O’Sullivan expressed concerns that setting a date for troop withdrawal in 2011 would allow the Taliban to become dormant until then, undermining Pakistan’s efforts to keep them at bay and giving Pakistan the message that America is a “fickle partner.”

Oelstrom, adjunct lecturer in public policy and director of the HKS National Security Program, largely agreed with O’Sullivan that the surge is appropriate, but he suggested the pullout date seemed “uncomfortable” and “arbitrary.” He did say, however, that forcing the Taliban to retreat for 18 months would allow valuable time to build security, achieve stability, and allow the Afghan people to establish a stronger governmental framework.

Oelstrom shared his perspective in an article on the HKS Web site in which he warned, “Bottom line: very little in the speech portends success. Coalition forces will press on in search of a tipping point.”

The other two panelists had more diametrically opposed views on the Afghan strategy’s prospects for success.

Stewart is Ryan Family Professor of the Practice of Human Rights and director of the Carr Center for Human Rights Policy, and wrote a best-selling book about walking across the region called “The Places in Between.” McGurk is a fellow at the Institute of Politics who worked on Iraq and Afghanistan issues as a National Security Council staff member for the past two presidents.

“The president was given a set of imperfect options, and I think here he chose the best one,” said McGurk, adding that the challenge will come in implementing the strategy in the next few months. The president must remain “really resolute” and see the strategy through, he said.

In contrast, Stewart said he thought the strategy was born out of a need to save face.

“I think the reason we are increasing is because it would be embarrassing to withdraw,” Stewart said, suggesting that pulling out would be perceived as a defeat. “He is sending the troops because he somehow allowed [Gen. Stanley] McChrystal to get away and write this report and once the report was out he was boxed in.” McChrystal is the top commander of U.S. forces in Afghanistan, and has asked for more troops.

The panelists all agreed that by July 2011, when the first wave of troops may begin pulling out, Afghanistan will not be completely stable, and the United States will need to make a long-term, dedicated commitment to the region.