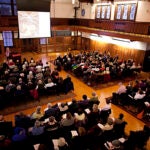 At last, archaeologists believe they have located a foundation trench

On one of the last of days of digging in Harvard Yard this fall, archaeologists believe they finally found evidence linked to one of the University’s earliest buildings, the Indian College that stood on the site from 1655 to 1698.

Archaeologists working in a chest-deep hole near Matthews Hall uncovered a narrow strip of dark earth in a lighter, orange-brown layer that marks natural soil. They believe that the dark earth is the bottom of an architectural trench most likely dug for the Indian College, built to house Native American students as part of the University’s original mandate to educate the youth of both European settlers and Native people. The find may fulfill the overarching goal of a series of digs in the Yard over the last four years.

“We found what we were hoping we might find,” Fash said. “We believe it might be an original wall location for the Indian College.”

The dark strip of earth is not much to look at, but to the trained eye it appears to be the remnants of a wall trench whose building materials — in this case stone ­­­­­­­­­­­­­­­­­—­ were taken and used elsewhere. Though most of the original architectural materials are gone, archaeologists and students did find numerous pieces of stone, brick, and roof tile that they believe were either remnants from the original wall or debris used to fill in the trench once the original stones were gone.

Finding the Indian College foundation may be the crowning achievement of years of work in the area, but it’s not the only significant discovery to emerge from the Yard’s soil. Earlier this semester, students displayed other treasures they found that help to illuminate early life at Harvard, including a slate pencil found by Winthrop House junior Daniel Balmori, who came across the pencil’s two halves on separate days of digging.

The pencil, a slim two-inch-long piece of what may be compressed clay, would have been used on a personal slate that served as a scratch pad, for writing and erasing and writing again.

The pencil was one of thousands of artifacts dug out of the ground by the 27 students in this fall’s class, which continued excavations begun in a summer class. Dating from the 1600s to the present, the artifacts include a piece of print type — the letter “o” —  that is likely from North America’s first printing press, which was housed in the Indian College. Other items include an intact musket ball that was never been fired, bits of brick, iron nails, many pieces of pottery of different sizes and color, glass, pipe stems, and oyster shells.

Hope Mayo, the Philip Hofer Curator of Printing and Graphic Arts at the Houghton Library, plans to further investigate the print type, one of several pieces uncovered in the digs over the years, to see if she can match it to a book in the Houghton’s collection.

The site was cordoned off from the rest of the Yard by an orange plastic construction fence for much of the semester. With the advent of cold weather, it has now been filled in.

Though the digging has halted, the student work continues. In final projects for this semester and in laboratory work in an associated class next spring, students will clean, catalog, and analyze their finds, writing reports on their activities.

After that, Fash said, those interested in learning more about Harvard’s early history will have to contain their enthusiasm until digging resumes when the class is next offered in the fall of 2011.

“We’re just going to have to be patient, and it will build up a lot of excitement the next time we have the class,” Fash said.

An exhibit at the Peabody Museum, “Digging Veritas: The Archaeology and History of the Indian College and Student Life at Colonial Harvard,” will remain on view through January 2011.