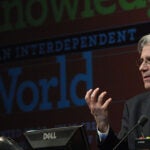 Harvard experts offer pragmatic pointers on getting healthy and staying there

You are what you eat. You’re also how you feel, how you exercise, how you sleep, how you handle money, how you relate to people, and what you value.

If you’re worried about your well-being, Harvard experts across an array of fields have some advice: Eat thoughtfully, exercise often, raise your children well, stash a few bucks away, and stop thinking it’s all about you.

People make choices every day that affect their health and happiness, but life’s complexity and its bewildering array of options — not to mention the species-wide lack of willpower — can make living well a challenge.

And the answer that has emerged to many of those questions points right at the face staring back from the bathroom mirror each morning.

JoAnn Manson, Elizabeth Fay Brigham Professor of Women’s Health at Harvard-affiliated Brigham and Women’s Hospital, and Walter Willett, chair of the Harvard School of Public Health’s Nutrition Department and Stare Professor of Epidemiology and Nutrition, said that, to a large extent, our physical health is in our own hands.

The long-running Nurses’ Health Study shows that as much as 80 percent of heart disease, 70 percent of strokes, and 90 percent of diabetes — three of the nation’s top 10 killers — are related to just four lifestyle factors: avoiding smoking, maintaining a healthy weight, exercising regularly, and embracing a heart-healthy diet.

“They are absolutely astonishing numbers,” said Manson, who is beginning a large trial of vitamin D’s role in preventing illness. “Studies demonstrate the powerful role of lifestyle factors in preventing chronic disease. One of the most important prescriptions doctors can write is to prescribe regular physical activity.”

One area where knowledge has advanced rapidly in recent years involves the importance of maintaining a healthy body weight, which Willett said is understood much better today than even a decade ago and is linked to heart disease, diabetes, and many cancers.

While a “healthy weight” depends on a person’s body type, Willett said that people ought to maintain the weight they had coming out of college, assuming they weren’t overweight then. For those who find it difficult to shed the pounds packed on since their early 20s, Willett said that even a 5 to 10 percent weight loss would be beneficial.

Eating healthy includes watching quality and quantity, Willett said. A healthy diet is full of fruits and vegetables, whole grains, liquid vegetable oils, fish, poultry, beans, and nuts, which Willett said are underrated as a health food. One should minimize red meat and avoid sugary beverages and processed foods, which are loaded with refined carbohydrates and sugar.

Even people who tend to take care of themselves may well engage in questionable behavior now and then. Family gatherings over the holidays not only ruin diets, they can spark domestic disputes, increase depression, and put more people on the roads after drinking alcohol, said Michael VanRooyen, an emergency medicine specialist at Harvard-affiliated Brigham and Women’s Hospital and an associate professor at both Harvard Medical School and the Harvard School of Public Health.

VanRooyen said the Brigham’s emergency room serves as a barometer of people’s lives. As the year draws to a close, there’s an uptick in travel-related injuries tied to drunk driving and foul weather. Doctors also see an increase in depression, sometimes because someone has no close relatives at this family-centric time of year — and other times because they do, and don’t get along with them.

For those looking to avoiding the ER, VanRooyen has a list of recommendations:

“Don’t drink and drive is the first 10 things I would remind people of,” VanRooyen said. “While everybody is worried about eating poinsettia leaves [over the holidays], the way to stay out of the Emergency Department is to not drink too much, and certainly don’t drink and drive.”

VanRooyen counseled those with chronic conditions not to put off regular doctor visits, since every year the ER sees a huge influx of patients who tried to get through the holidays without seeing their doctors and couldn’t make it.

One often-neglected aspect of everyday health involves what people do when they’re not doing anything else: sleep. Research is rapidly expanding the understanding of sleep’s importance to mental and physical functioning. In addition to its obvious importance in alertness, sleep has been shown to affect memory formation and learning. Missing too much sleep, it’s now understood, can be downright dangerous for those in certain fields, from truck drivers to doctors.

“We are just starting to realize how important sleep is to our health,” said Daniel Aeschbach, a sleep specialist at Brigham and Women’s Hospital’s Division of Sleep Medicine and an assistant professor at Harvard Medical School. “Staying awake for 24 hours impairs your functioning comparable to being legally drunk. It is dangerous.”

Aeschbach suggested several rules for getting a good night’s sleep. Among them are to keep a regular sleep schedule; allot enough time (eight or eight-and-a-half hours); avoid caffeine in the afternoon and evening; make sure there’s fresh air and a comfortable temperature in the bedroom; avoid activities right before bed that are hard to unwind from; and keep the bedroom clear of televisions and other disruptive devices.

Though it’s a step in the right direction, having a rested body doesn’t guarantee a refreshed, healthy spirit, a sense of life’s importance and meaning. Cheryl Giles, Peabody Professor of the Practice of Pastoral Care and Counseling at Harvard Divinity School, said that maintaining one’s spiritual health takes just that — maintenance. She recommended a daily respite from the thousand worries that plague everyone as a way to maintain spiritual health.

Giles, who teaches future pastors how to counsel members of their congregations, said people are often stressed and depressed these days, and trying to reconcile what’s happening to them with their own religious life.

Giles said spiritual practice — regardless of personal belief — should not be limited to Saturdays or Sundays but should be part of every day. Giles recommended that people find quiet time each day for meditation, prayer, journal writing, or other forms of reflection. It’s an important exercise, she said, that helps people to avoid being consumed by routine daily demands.

“You should take 10 minutes, 15 minutes a day to sit down and be silent,” Giles said. “All this stuff goes through your head. This is an opportunity to let it out.”

For those whose prayers include improved financial health, David Laibson has got your back. Laibson, the Robert I. Goldman Professor of Economics, applies lessons from psychology to analyze individuals’ financial behavior. After years of observing and experimenting, Laibson has come to know people’s tendencies well. He described two main factors in play for most people handling their finances: procrastination and confusion.

“I can’t tell you how many resolutions to exercise I’ve made and broken,” Laibson said. “We know we should eat better, and yet all our promises prove to be empty.”

Salvation awaits, however, and it lies in automation. Laibson said people should take advantage of automatic savings plans offered by their employers and put money in their retirement accounts. Deducting money right from your paycheck makes savings a top priority without requiring a weekly willpower check.

But as the nest egg grows, confusion sets in, Laibson said. The financial markets have a bewildering array of choices, and if those choices involve actively buying and selling financial instruments to make money, the average investor shouldn’t even consider them.

“The best advice for the small investor is that you can’t time the market, and it’s unlikely you’ll find someone to time the market for you,” Laibson said. “You can’t out-trade Goldman Sachs. What you can do is reduce fees and diversify.”

“Historical returns are poor indicators of future returns, but historical fees are a good indicator of future fees,” Laibson said.

In addition, investors should diversify their portfolios, holding domestic and international stocks, bonds, and money market funds. The ideal proportion of those investments depends on a person’s age. Laibson recommends investing in life cycle or target date funds, which are offered by most major investment houses and which automatically adjust an asset mix to take into account an investor’s age.

In addition, anyone who believes that money in itself can buy happiness may be interested in the work of Michael Norton, assistant professor at Harvard Business School. Norton’s work indicates that happiness and money are linked — but only if people give some of it away.

In work spanning several studies, from street-level experiments to national surveys, Norton has shown that while money spent on ourselves gives us a temporary buzz, money spent on others provides more durable joy.

In one experiment, people were given envelopes of money and told to spend the cash however they wanted. Researchers called them later to find out how they spent it and how they felt. Those who gave money away reported higher levels of happiness than those who spent it on themselves. In other research, Norton and his colleagues surveyed people nationally about spending habits and happiness, finding that those who give to others —particularly those who give regularly — report higher levels of happiness.

“Research shows it really doesn’t make people happy to spend money on themselves,” Norton said. “It’s not how much you give, it’s that you give…. If you have an extra $20, it’s better to spend it on someone else than on yourself.”

Thinking of others is not just important in enriching everyday life through charitable giving, it may also be an important consideration — and perhaps a missing ingredient —in how to raise children well.

Richard Weissbourd, a lecturer at Harvard’s Graduate School of Education and the Harvard Kennedy School, said modern parenting emphasizes children’s high self-esteem and achievement in school, sports, and other activities. What’s often missing, Weissbourd said, is an emphasis on thinking of others, on being kind and moral, and on contributing to families and communities.

“As a culture, we are very focused on kids’ happiness and self-esteem, and many of us believe happiness and self-esteem will lead to caring and responsibility for others, that feeling good about ourselves will enable us to be good to others,” Weissbourd said. “To kids we say, ‘The most important thing is that you’re happy.’ We don’t say to kids, ‘The most important thing is that you’re kind.’ ”

Teaching children to be concerned for others should be overt, Weissbourd said, and not just left to chance. Children also should learn to act morally, not because it makes them feel good or it puts them at the head of their class, but because it’s the right thing to do.

Norton and Weissbourd may be onto something. Though people make individual decisions that affect their well-being every day, people are at their core social animals. Recent research has detected those social underpinnings in their personal behavior.

Nicholas Christakis, professor of medical sociology at Harvard Medical School and Beth Israel Deaconess Medical Center, explores the effects of social networks on health. His research indicates that everything from obesity to smoking to happiness to loneliness can spread through social networks.

Still, Christakis cautioned that someone looking to live healthier should not just avoid friends who have unhealthy habits. Social networks are important, providing companionship and support even from those who smoke or eat junk food. There’s far more to gain, he said, in lending a hand to struggling friends than there is from cutting them off.

“It’s not a good thing to have fewer friends,” Christakis said. “We’re all in this together. By taking care of people in the group, people on the edges of the network, we benefit not only those people, we benefit the whole group.”