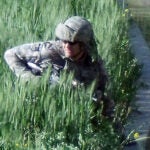 'The Cartoons that Shook the World' author taps background for insight

In 2005, a Danish newspaper published a dozen editorial cartoons that would ignite an international controversy involving free speech and discrimination.

Many of the images depicted the Islamic prophet Muhammad. In the most memorable and inflammatory of the drawings, the religious messenger was seen with a bomb tucked in his black turban. The cartoons appeared with an editorial about the importance of tolerance by the Muslim community and the paper’s growing concern over self-censorship. The images ran under the headline “The face of Muhammad.”

Muhammad’s image has appeared in print for centuries, but many Muslims believe that depicting the prophet is blasphemous. Ensuing anger over the caricatures resulted in riots in several countries, and more than 200 people died.

It was largely political posturing that sparked the furor over the depictions of the Islamic prophet rather than universal indignation, said Jytte Klausen, a Brandeis professor of politics who recently wrote “The Cartoons that Shook the World.”

Klausen, who is also a research associate at Harvard’s Center for Middle Eastern Studies, addressed a crowd Tuesday (Dec. 1) at the Barker Center about the upheaval, which she researched in detail for her new book, interviewing almost all of the key players. The center’s Islam in the West program sponsored the discussion.

“It very quickly became clear to me that I was in a unique position to write about this topic,” said Klausen, in part because of her Danish roots and familiarity with the newspaper that was always in her home during her childhood. “The sentiments that used to inform the paper were well-known to me,” she said, adding that in recent years the newspaper had adopted a much more libertarian leaning, in keeping with a trend in Europe toward a more populist form of conservatism, one focused on immigration as a key issue, with Islam and Muslims often viewed as a challenge to national identities.

Klausen had strong contacts in the Muslim community, having recently finished a book on politics and religion in western Europe, based on interviews with Muslim leaders there.

The Muslim outrage, argued the author, had two main sources, including the Egyptian government’s decision to make a “diplomatic issue” of the cartoons and complain to both the Danish government and the United Nations. With Egyptian elections pending, she said, officials in Cairo used the cartoons to “push back against the American agenda for democratization as a forward security strategy in the Middle East.”

For Egypt, said Klausen, the controversy represented an opportunity “to put on the record that the West abuses human rights as well.”

The other source of unrest, she said, was a group of imams and a coalition of religious activists in Denmark who were increasingly frustrated with what they felt was an unacceptable level of Muslim stereotyping.

“The cartoons were the last drop in a glass that was already pretty filled with bitterness,” she said.

But the violence and deaths occurred in faraway countries such as Nigeria, where preexisting tensions or “pre-existing theaters of war” were already in place, said Klausen, adding that the cartoons were not the real culprit.

The legacy of the cartoon controversy was a “sad and mixed one,” said Klausen. “Everybody was looking at the same 12 drawings … but people had very different interpretations of what they saw.”

Heightened censorship, both within the Arab world and the West, was one of the lasting repercussions from the crisis, she said, with her own work a partial casualty. After consulting with some authorities on Islam, officials at Yale University Press chose not to reprint the cartoons and removed all illustrations of Muhammad from her book.

In a final twist of irony, a technical oversight stranded the author without a projector to show the crowd her slides, which included the offending cartoons. She was left simply to describe the images to the audience.

Ultimately, Klausen said, her desire to instruct and educate outweighed her frustration and anger with Yale’s decision to remove the images, and she chose to publish the book anyway. Still, her anger over the censorship was evident in her voice.

“My argument is that in order to understand why Muslims were upset by these cartoons, we need to look at them and discuss them and understand. That cannot be done now,” she said. “I didn’t think it’s the sort of thing that would happen in the United States.”