Intersection of climate change and Christianity 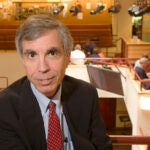 The role of religion in combating global warming

“What if we face up to the fact that, unlike the U.S. government, Mother Nature doesn’t do bailouts?” Sallie McFague asked an audience at Harvard Divinity School (HDS).

In last month’s session, McFague was quoting New York Times columnist Thomas L. Friedman, while offering her own analysis of the current dual crises rocking the globe, one financial and the other environmental. Both, said the theologian in residence at the Vancouver School of Theology, are the product of greed.

“The same insatiable desire for more, more money, more energy … underlies both of these planetary disasters.”
But while the world’s economy appears to be crawling back to life through substantial governmental interventions, the outlook for the environment, she said, is bleak.

An author and a scholar, McFague is a leader in the fields of ecofeminism and Christian theology. Her most recent book is “A New Climate for Theology: God, the World, and Global Warming.” She gave the 2009 Dudleian Lecture as part of a yearlong series sponsored by the Center for the Study of World Religions at HDS titled “Ecologies of Human Flourishing.”

Her presentation, “Cities, Climate Change, and Christianity: Religion and Sustainable Urbanism,” underscored the dire state of the global environment and the need, she said, for a paradigm shift, one that presents an organic model for urban living and a method for “thinking differently about nature and our place in it.”

Religion can play a role in numerous ways, McFague suggested. It can help people, particularly city dwellers, connect with the concept of space and place, an understanding that their environment is derived directly from the Earth. What lies behind all construction, the foundation of every city, she said, is nature, “that encompassing and mysterious term for everything that is.”

By replacing the traditional Christian concern with time and history with a notion of space and place, she said, there can be a new focus on Earth rather than heaven, on bodies and their basic needs, rather than on “interpretation, meaning, and eternal salvation.”

In addition, she suggested that the concept of self-emptying, which is found in many religions and involves a type of detachment from worldly desires and an opening up to God, could be a template for how people may “live differently.” It could help to provide insight into needs and wants, acting as “an invitation to imitate the way God loved the world.”

“Copenhagen does not look like it’s going to work, folks,” she said of next month’s U.N. Climate Change Conference in Denmark. But that’s no reason to give up.