The future of news 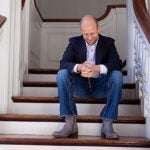 Rebel with a cause

The future of news? There might not be one.

Or if there is, newsgathering might require taking steps that go against the grain of newsroom ethics and tradition, with armies of untrained citizen journalists, for instance, or government funding that sets up a conflict of interest.

The question of the future of American news — and by extension the fate of the First Amendment — was the overriding concern this week (Nov. 2) for a panel of experts at the Harvard Kennedy School. The co-sponsors were the Institute of Politics and the Joan Shorenstein Center on the Press, Politics and Public Policy.

It was an impressive gathering. Two of the five panelists have won Pulitzer Prizes; two others are or were Harvard fellows; and one oversees a Pulitzer-winning newsroom. Three represented the traditional print world, one television news, and the other dot-com journalism.

The hour-long event at the John F. Kennedy Jr. Forum acknowledged both the despair and the hope that journalists feel over the present state of the American news business, rocked by economic turmoil and the rise of the Internet.

Moderator Tom Fiedler, a onetime Shorenstein Fellow (2007) and Visiting Edward R. Murrow Lecturer at Harvard (2008), opened with a lament: “It is difficult not to feel like we’ve come here to sit in mourning for something that we’ve loved for many years.”

In the last week alone, he said, came a wave of grim announcements: Forbes is cutting a quarter of its staff; The New York Times by year’s end will ax nearly a 10th of its newsroom staff; The Wall Street Journal is eliminating its story-rich Boston bureau; and Time Inc. announced 540 layoffs. In addition, Gourmet magazine folded.

Meanwhile, Business Week was recently sold off “like some broken-down horse,” said Fiedler, now dean of the College of Communication at Boston University.

But toward the end of session, panelist Alex Jones held his arms out to stop the freight train of bad news, declaring that online journalism “can be extraordinarily powerful,” and is capable of “breathtaking” news stories.

Jones, like Fiedler, is a Pulitzer Prize winner. He is the Laurence M. Lombard Lecturer in the Press and Public Policy, director of the Shorenstein Center, the former host of “Media Matters” on PBS, and author of the recent “Losing the News: The Future of the News That Feeds Democracy” (Oxford, 2009).

Earlier in the session, Jones added darker thoughts, fearing that in the face of economic uncertainty, “the resources for covering that news — the ability, the will — to cover that news is eroding.” Also at play in uneasy times, he said, are the core standards of American journalism, including objectivity, a code of ethics, and the will to support the First Amendment, the “public mission” of newspapers.

It was not so long in the nation’s past that freedom of speech was wrested into the arena of the press, and now it is threatened again, said Jones. “You could go to jail for opposing World War I, and people did.”

Meanwhile, newspapers create most of the “cumulative reporting” that underlies American journalism, said Jones, and if they disappear it will create “a terrible vacuum” of information that drives the national conversation.

Panelist Marty Baron, editor of the distinguished but beleaguered Boston Globe, acknowledged that economic trouble has shrunk both his news staff and his budget by 30 percent. But at the same time, he said, “we retain our sense of mission.”

Sacrifices were required, said Baron, including pulling back on foreign coverage and national news bureaus.

Television news operations have undergone similar retrenchment, said panelist Robin Sproul, a former Shorenstein Fellow at Harvard who is now vice president and Washington bureau chief for ABC News. “We go through a process too of making choices.”

ABC now has fewer operations overseas and pools resources with other networks to gather video, she said. In turn, ABC has invested more heavily in its Web site, and has focused its news operations “in areas we think we can make a difference,” said Sproul, including medicine, health, law, and justice.

Traditional news operations are pulling back, but citizen journalists are making themselves increasingly heard and seen. That is a sign, perhaps, that the future of journalism will be a “hybrid world” that mixes professional and amateur news providers, said Jeff Howe, a panelist and authority on social media.

A Nieman Fellow this year, Howe is a contributing editor at Wired magazine, where in 2006 he and an editor coined the term “crowdsourcing.” That is when formerly professional tasks — taking stock news photos, for instance — are outsourced to the public, the “crowd.” It’s a new problem-solving and production model that has found its way into the news business.

Not long ago, said Howe, the only citizen journalists admitted into the news game were sports enthusiasts. Now reader-generated news is part of the formal structure of the Gannett Co. and other media operations.

Will citizen journalists ever replace their traditional counterparts? “No,” said Howe, bluntly, since they lack “a deep network of sources,” editing staff, legal services, and the fine points of reporting know-how, such as filing information requests under the Freedom of Information Act.

But “some successes” are possible, he said, and there are signs of “a great process of professionalization going on.”

Sproul acknowledged that the future of the news “is an inclusive one,” with media organizations acting as final “curators” of reportage.

Baron said citizen journalists will never replace in-depth newsgathering, but they can be useful in supplementing the act of reporting. They might supply “one photo, one fact, one opinion,” he said, but “journalism is more than that.”

After Jones rounded off the panel with a note of hope, Baron added a note of defiance.

Yes, newspapers in particular need a new business model to right themselves, to survive, and to prosper again, he said. But public financing of journalism, a staple of media punditry these days, is not a viable option.

National Public Radio and similar outlets do good work, said Baron, but it is “highly derivative” and often dependent on deep-digging newspaper journalists.

One reason is that when public news operations challenge the legitimacy and the honesty of government with their reporting, “they put their own resources at risk every time,” Baron said, “and that’s the definition of a conflict of interest.”

He declared himself “as concerned as anyone … over the future of journalism, but I hope the answer is not to turn to the government for help.”