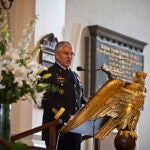 A bell tolls for bravery

His appearance attracted a crowd and a frenzy of media attention.

But those who were anticipating a dramatic encounter involving Eliot Spitzer, the former governor of New York who resigned last year in connection with a prostitution case, came away instead with a highly nuanced argument about the need for broader financial regulations.

Spitzer, J.D. ’84, appeared at Emerson Hall Thursday (Nov. 12) at the invitation of Harvard’s Edmond J. Safra Foundation Center for Ethics to take part in the center’s Lab Lectures on the Question of Institutional Corruption. The lectures are designed to launch a five-year research project on the topic.

Spitzer made a name for himself as the tough-minded attorney general of New York state, in large part for his aggressive prosecution of white-collar crime, including insurance companies and Wall Street securities firms. During his remarks, he took the audience through a lengthy and detailed discussion on the importance of government involvement in establishing transparency in the financial sector.

Government has a significant role to play, argued the Harvard Law School (HLS) graduate, in establishing a critical sense of economic transparency.

Spitzer outlined what he considered a host of problems with the government’s response to the nation’s economic crisis, including his concern with the notion that a company can be “too big to fail,” an argument made during the early days to help justify an expensive corporate bailout.

“Too big to fail is too big not to fail. When [companies] get that big, they are inevitably going to fail, because you can’t manage them.”

Corporate governance is at “the heart and soul of what has failed” the nation’s economic system over the last quarter century, said Spitzer, adding that one of the clear ways forward is to allow shareholders to elect a company’s board of directors.

The subject of Spitzer’s resignation from the governorship came up only briefly, at the beginning and end of the discussion.

“We hold these lectures to address serious and difficult matters,” said Lawrence Lessig, professor of law at HLS and the center’s director, who introduced Spitzer. But, he added, the attention generated by the talk meant it required additional “framing.”

“No one doubts that what Gov. Spitzer did was wrong … likewise no one doubts that until the moment he was charged, at least, Gov. Spitzer inspired the very best in our profession. Whether popular or not, he worked aggressively to serve ideals bigger than himself … he was enormously successful in holding accountable those who used power to do enormous harm.”

“I have invited Eliot Spitzer to contribute to these talks because of the breadth of his experience,” Lessig  said, “and, no doubt, the depth of his reflection upon where and how the problems which we study…  might be addressed.”

Following his talk, Spitzer gave a simple reply to a question involving his decision to leave office: “I resigned because I thought it was the right thing to do, and the actions that led to it were wrong.”