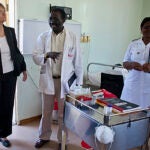 JOHANNESBURG, South Africa — Education is a force for liberation, President Drew Faust told an audience Thursday (Nov. 26) at the University of Johannesburg (UJ) at Soweto, where she announced that Harvard and the host university were developing an initiative to train school principals in some of South Africa’s most desperate regions.

“In rural areas near Soweto, school principals are running classrooms in fields and abandoned school buses and shipping containers, sometimes risking their lives to serve students who want to become doctors and civil engineers,” Faust said. “Our universities hope to create an Educational Leadership Institute that will make this campus a center of educational innovation for Africa, and indeed for the entire world.”

South Africa’s Minister of Higher Education and Training Bonginkosi Emmanuel “Blade” Nzimande congratulated both schools for their leadership in pursuing the collaboration.  “The building blocks which this institute will eventually comprise … are essential to our government’s goal to produce a quality of learning and teaching system.”

Faust spoke to an audience of faculty, students, and staff on the Soweto campus. Her six-day trip highlighted the University’s ties to the region, where faculty are engaged in a wide variety of initiatives, from improving business education to delivering health care in some of the continent’s most remote areas.

In her speech, titled “The Capacity to Make History,” Faust, a scholar of the American South, noted parallels between South Africa’s long struggle for freedom and that of the United States following the Civil War.

“In those stories lies a common struggle for liberation, for universal rights before the law, and for human dignity against the evils of slavery and apartheid,’’ she said. “And so if the journey from the United States to South Africa is a long one in miles, it is for countless Americans a very short one in emotional resonance. I am one of those Americans.”

Soweto was the site of a key moment in the fight against apartheid. In 1976, thousands of students took to the streets to demand equal access to education. “Soweto is hallowed ground — at the center of the struggle for freedom that cost so many lives,” Faust said.

“If you want to understand what ‘living democracy’ means to the new South Africa, look no further than this remarkable institution,’’ she said.

The potential education initiative that Faust announced is the result of collaboration between the UJ Faculty of Education and Harvard’s Graduate School of Education (HGSE). Drawing on the local institution’s pioneering efforts in educational reform, and HGSE’s 30 years of experience in leadership training, Faust said that the initiative would train school principals to “help transform lives and South African education.”

“We must believe, as [Nelson] Mandela said, in our ‘capacity to make history,’’’ Faust said. “We in the United States and you in South Africa have been granted a very special moment in the history of the world and in its progress towards freedom. It is our challenge to make the most of it.”