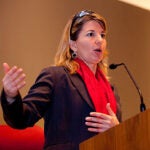 GABORONE, Botswana — Harvard President Drew Faust saw firsthand how Harvard is helping the African nation of Botswana to fight AIDS, when she toured facilities on Wednesday (Nov. 25) in two communities where a Harvard-Botswana partnership is operating anti-AIDS programs.

Faust met with young Harvard-trained researchers in a state-of-the-art laboratory built and operated by the Botswana-Harvard Partnership for HIV Research and Education (BHP), a novel collaboration between the Harvard School of Public Health’s AIDS Initiative (HAI) and the government of Botswana.

Botswana’s anti-AIDS programs are considered models of how to fight the disease, although the nation remains among those hit hardest by AIDS.

Botswana is an early stop on Faust’s trip to southern Africa. She also will visit Johannesburg and Cape Town in South Africa. She is scheduled to give a speech at the University of Johannesburg on Thursday (Nov. 26).

Faust arrived in Botswana’s capital, Gaborone, early in the morning and drove to the village of Mochudi, where she met with Max Essex, Mary Woodard Lasker Professor of Health Sciences and chair of the Harvard School of Public Health AIDS Initiative. Essex showed Faust several projects under way at Mochudi Hospital. Among them is a successful effort to determine the best drug regimen to prevent transmission of HIV from breastfeeding mothers to their nursing children.

Faust also visited the BHP laboratory in Gaborone, talking with young researchers who trained at Harvard. She met later with Botswana’s minister of health to discuss Harvard’s continuing commitment to Botswana, and with the University of Botswana’s vice chancellor to review the current undergraduate exchange program and to explore new collaborations. The day ended with a reception attended by two former presidents of Botswana and other government officials from the United States and Africa.