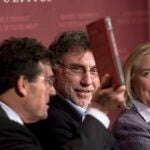 The future of news

HKS professor Robert Stavins will work behind the scenes

En route to the December 2007 climate summit in Bali, Robert Stavins watched as delegation members from the United States, Germany, Britain, and other countries boarded their plane carrying copies of his book.

“Many had copies,” said the Albert Pratt Professor of Business and Government at the Harvard Kennedy School (HKS), “and I noticed that several had earmarked pages with … yellow sticky notes.”

The book was “Architectures for Agreement: Addressing Global Climate Change in the Post-Kyoto World.” Edited by Stavins and Joseph Aldy, then a fellow at a Washington think tank, Resources for the Future, and now special assistant to the president for energy and the environment, the book described the research results from a Harvard-led initiative on climate change.

Stavins directs the Harvard Project on International Climate Agreements, an interfaculty, multinational, multidisciplinary initiative that works to educate and inform officials who develop climate policy. The project includes 35 research efforts in Europe, the United States, China, India, Australia, and Japan, and has an outreach component that works directly with many governments, including the nations accounting for about 90 percent of global emissions.

The initiative is broad in scope. It includes a range of Harvard faculty members, as well as international authorities in international relations,economics, political science, and the law.

“No university, no sector, no country has cornered the market on wisdom, so it’s necessary to have a broad set of perspectives bearing upon the question,” said Stavins.

Stavins and his team have met frequently in recent months with key Washington players concerning the upcoming negotiations. They were also contacted last year by Denmark’s prime minister to help him prepare for the Copenhagen summit.

While Stavins and members of his project won’t have official seats at the negotiating table next month, they will work behind the scenes, holding meetings to explain their findings to nongovernmental organizations, attending delegates, and the press. In addition, Stavins hopes that some meetings will bring together members of negotiating groups who may not “normally be in agreement.”

Stavins believes there is little chance for a breakthrough agreement at the summit, and he adds that is not entirely a bad thing. He explained his position by providing a historical perspective, and a little baseball parlance.

Next month’s meeting is a follow-up to the Kyoto Protocol, a 1997 multinational agreement aimed at curbing global greenhouse gas emissions through 2012. The Kyoto summit set binding targets for 37 of the world’s industrialized nations, but was considered a failure by many because it did not restrict emissions from some of the most rapidly growing economies, such as China and India. In addition, the United States, a major emitter, would not ratify the agreement.

In Copenhagen, a similar, target-based agreement, said Stavins, “would be a Kyoto Protocol on steroids. It would mean more stringent targets for the industrialized world and no targets whatsoever for the developing world. It wouldn’t be ratified by the United States Senate, there would be no involvement from India or China, and it would do virtually nothing about the problem.”

The Harvard professor said the problem of climate change cannot be solved in a single stroke.

“The cliché that one often hears about the American baseball season is even more true about climate policy: It’s a marathon, not a sprint.”

Stavins said that positive results from Copenhagen, ones that could serve as a foundation for climate policy going forward, would include a joint communiqué on climate change principles, or what his initiative calls a “portfolio of domestic commitments,” in which each nation promises to abide by its domestic climate change policies.

“A date like December 18th in Copenhagen is arbitrary in terms of the nature of the problem,” said Stavins. “The important thing is what happens in the long term. So that’s why I would say that the goal for Copenhagen should be meaningful global action over the long term, not some notion of success in Copenhagen itself.”

“It’s a matter of building institutions, and that takes time,” he added, noting that he believes that the Obama administration understands the need for a highly nuanced approach to a solution.

“This administration has excellent people. They take climate policy very seriously and intelligently, and when I say intelligently, I mean they are very aware of the science, as well as the economic and political realities of the challenge.”