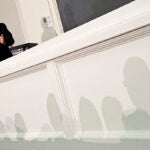 She is the first woman to lead the U.S. House, and last week at the Harvard Kennedy School (HKS) said she was one step closer to another milestone first for the nation — sweeping health care reform.

“Oh, what a night,” Nancy Pelosi told David Gergen, HKS professor of public service and director of the School’s Center For Public Leadership, recalling her recent victory in the House, which passed the health care bill by a narrow 220-215 margin.

“It’s very humbling,” said Pelosi of the bill’s passage, saying she was standing on the shoulders of predecessors such as President Theodore Roosevelt, who supported national health insurance, and the late Sen. Edward M. Kennedy, who made health care reform the hallmark of his career.

“I tell my members, ‘You were born for this moment; this is our responsibility,’” she said.

The bill now heads to the U.S. Senate for debate.

Pelosi joined Gergen at the John F. Kennedy Jr. Forum Nov. 13 for an hour-long conversation titled “Leadership in an Era of Reform.” During the discussion, she offered her perspective on various topics, including the health care bill, leadership issues, negotiating tactics, the importance of women in elected positions, and the war in Afghanistan.

The abortion issue was a focal point of the evening’s discussion.

Before the House approved the health care bill, the legislation hit a late roadblock for many of its pro-choice supporters in the form of an amendment sponsored by Democratic Rep. Bart Stupak of Michigan. The amendment restricts the use of government-backed health insurance coverage for abortions and places restrictions on abortions offered through private insurance plans that are subsidized with government funds.

While Pelosi said she too was concerned about the restrictions included in the Stupak amendment, the tactic she used that allowed House members to vote against the amendment, but ultimately for the bill, meant they were able “to advance the ball down the field.”

“It’s got to be about reforming the health insurance industry,” not about abortion, said Pelosi.

But despite the challenge of the health care bill, Pelosi called the passage this year of  supplemental funding for the war in Afghanistan the “hardest sell.”

She referred to recent comments from Karl Eikenberry, the U.S. ambassador to Afghanistan who cautioned President Obama about sending more soldiers to the conflict, and the lack of a strong political partner in the country. She said it would be “very hard to get many Democrats to support a big increase in troops to Afghanistan.”

Asked by a Harvard College student for her tips on negotiating, Pelosi said the art was above all a fine balancing act.

“You have to be passionate about what you believe in, but dispassionate at the table and how you negotiate,” she said. “It’s not about an ideological debate … but a negotiation that builds consensus, that has legitimacy because people agree to it.”

Acknowledging that the presence of more women in the House likely contributed to passage of the health care bill, she encouraged those in attendance to consider getting involved in government.

“Know your power,” Pelosi told the women in the audience, a reference in part to her own rise in government from “the kitchen to the Congress,” and to her recent book, “Know Your Power: A Message to America’s Daughters.”