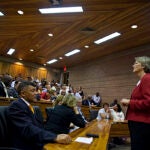 In a talk hosted by Cherry A. Murray, dean of Harvard’s School of Engineering and Applied Sciences, Parker recently (Nov. 18) shared his “ground-truth” experiences from the front lines with a packed audience of staff, faculty, students, and uniformed ROTC trainees.

“We’ve overengineered this war,” said Parker, the Thomas D. Cabot Associate Professor of Applied Science, who served in Afghanistan in 2002-03 and in 2009. The true battle, he explained, was one of information (“influencing local politics”) and infrastructure (“developing roads, schools, and mosques”).

Ultimately, winning over the population there is “the substrate for victory,” Parker said, referencing his own field of tissue engineering, where cells are grown and guided on chemical scaffolds. Without a holistic, long-term strategy of “kinetic and nonkinetic solutions” implemented over several decades, he said, the prospects for even limited success are dim.

Parker showed how life on the battlefield is harsh, playing footage of a controlled explosion of a “small” IED (improvised explosive device, such as a roadside bomb) that rocked the camera. In another clip, Parker and his fellow soldiers were sandwiched on a narrow mountain pass after a larger roadside bomb eviscerated a vehicle in front of their own.

The audience gasped on seeing the battalion ravaged by incessant gunfire streaming from a nearby village where enemy soldiers had holed up. By using villagers as human shields, a common tactic, air support becomes “impossible,” and the fighting, said Parker, “gets gnarly.”

In fact, the fighting has become so intense that even the trained military dogs that sniff out bombs have begun to develop signs of post traumatic-stress disorder. When a $10 IED can take out a $600,000 armored assault vehicle, the challenge of winning by “bang, bang, shoot ’em up” tactics becomes an economic and mathematical impossibility, Parker said.

Treating the situation as a systems-level problem, he said the only way forward involves improving the understanding and influencing the dynamic socioeconomic system of Afghanistan and the surrounding countryside.

“In the villages,” he said, “the most high-tech thing is the AK-47, which is then followed by the wheel.” Much of the population remains so isolated that when American soldiers first showed up in 2002, many tribes thought “they were those Russians they once heard about.”

Moreover, grave poverty makes the population susceptible to exploitation by fundamentalist organizations such as the Taliban and by unknowing participants in someone else’s political agenda.

Given the “medieval” conditions of the area, “using money to buy friends” becomes a highly effective weapon for the military. To gain trust, young “gunslingers” find themselves having to assume the role of diplomats, civil engineers, and project managers, influencing, from the bottom up, one local leader and one village at a time. The problem is, Parker, said, that they have not been properly trained for these tasks.

Pointing to two photos, one with Parker approaching a local Afghan leader and one of him shaking his hand, Parker said that “no one has the technology” to understand how to achieve this simple yet powerful act of friendship.

“With no such laws or targeting algorithms for targeting such assets, success for a soldier comes down to force of personality or luck,” he said. How a soldier engages a local leader has geopolitical implications, as one relationship may influence thousands of others.

Further, the decision of where to place a road, or which mosque to refurbish, may determine the course of the war more than a broad tactical decision made by the State Department. Because “there is no emergence of a leadership class in Afghanistan,”

all politics and the current war will remain local.

With that in mind, Parker ended with a series of questions that he hopes students and faculty from Harvard and elsewhere might tackle. Could we build a tool, along the lines of the Web virtual world Second Life, for teaching engagement techniques in countries similar to Afghanistan? Could insights from social science, neuroscience, cognitive science, and engineering create algorithms that could help predict the potential success of placing a road or a school in a particular region? Might soldiers in the field “do a bit of sociology” and take their findings back to experts for analysis?

The decision that President Obama now has to make about the future of the U.S. presence in Afghanistan and the surrounding region is paramount, Parker said. It comes down to “whether we are going to pull the ripcord or stay for a while.” And by a while, he meant for the foreseeable future.